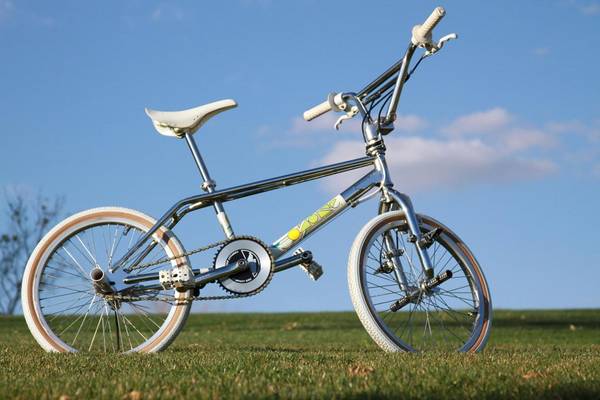 This was my younger brother's bike, and it has been in the family since it was only a couple years old, I want to say around 1991 or 1992 maybe. It first belonged to an older neighbor of ours, (I say older because at the time my brother was probably twelve and the guy who had it was maybe eighteen or something) In any case, the guy bought it new and as I recall he was sort of a poser, he was always in his driveway polishing it and "tuning" it up but we don't remember actually ever seeing him ride it. Looking back this was great for us because it was like new when we got it, if it had belonged to one of our buddies it would have been trashed. All the kids in the neighborhood tried for years to get him to sell it or trade for something but he never accepted any offers, he just wouldn't budge. He probably wouldn't sell because he was a poser and got lots of attention from all the neighbor kid's who wanted it, problem is, after a while, everyone stopped asking. We all figured he was going to keep it forever.

One Saturday morning my brother came running home all excited saying he needed money quick, he needed $80, and he needed it NOW. "What the heck for?" I said. He says, "The neighbors having a yard sale, AND HE"S SELLING THE OZONE!" "I GOTTA GET 80 BUCKS FAST BEFORE SOMEONE ELSE BUY'S IT!!!!!!!" I didn't have it, so this began the mad dash, we HAD to get the money, it wasn't a matter of IF we got the money, we needed it NOW! Our Dad heard the commotion and agreed to give a major advance on his allowance, I say major because back then we got like two or three dollars a week if we were lucky. I think the run back up the street was probably the longest ever, what if it was gone? What if someone else was buying it right now? No way, we'd wanted it for too long, it was ours, it had to be! Approaching the house my brothers eyes were scanning the yard for a glimpse of a box to come into view, "please be there" he was saying, "PLEEEEEASE BE THERE",...........it was,.......right there where he'd left it a few minutes ago, in pieces, in a box, all shiny and glowing, it didnt belong in a box, no way.

The next few days were like Christmas, working on a new bike, especially one you've coveted for so long is a feeling most of us know well, but can't really be described. Getting the brakes tuned just right, the pads freshly cleaned with some 2000 grit, the cables oiled just enough so there's no resistance when you squeeze the lever, the chain set with just the right amount of tension, the tires with the pressure set to your weight, not too hard so you lose traction around sharp corners but not too low so you dent your rims on the curbs. The seat angled so it's not crushing your nuts, but not too far down so you're sliding off on long hauls. Setting the bars so there good standing or sitting, and then you get on and the first ride down the driveway and the roll off the curb and out into the street and down the street, priceless, it's your new bike.

My brother rode this bike for years, and had lots of adventures on it, spent many days out front of our house practicing flatland tricks, rode it all over Arizona, picked up a few girls with it. I remember it being kind of a mystery bike, it looked great, it rode great, the welds were clean, the components were quality, it was as good a bike as any Haro or Redline or Hutch or GT or any other top end bike we'd ever ridden, but who was Ozone? Where did they come from and where did they go? Why did they make such a great bike and then just disappear? There just wasn't any information available back then, it wasn't cheep, it was a great bike, either way we didn't think to much about it, we just rode it.

It eventually ended up in my shed along with my original Redline rl20a and my brothers Redline pl carrera. We had to keep them, they had too much history to let go of. And when the BMX bug hit me again a few years ago I decided to restore my Redline first, and I had a blast doing it, especially since I have three boys now and I was able to teach them alot about bikes and how to work on them and best of all how to ride them.

Once I was done with the Redline I was jonesing for another project so I asked my brother if he had any plans for the Ozone. He said no, and that if I wanted it, I could have it,  (he's a way cool brother) but that he wanted to keep his proline and the three piece cranks on it. So I was back in business with another great project.

I had alot of work ahead of me on this one because the rust had gotten to it from when he was younger and he left it outside alot (why did we ever do that to our bikes?) but it came out great and aside from the original decals being cracked and faded, the graphics where still intact and the chrome doesn't have a scratch on it. The frame, forks, bars, wheels, stem, seat post and clamp, brake levers, gyro, headset, compact disc, are all original and in great shape once cleaned. The parts I replaced were tires, grips, brake calipers, cables, seat, cranks, chain, and a few nuts and bolts.

I had a heck of a time trying to get parts for the rear brakes, the dual cable design is a great idea but since it didn't catch on there wasn't much available to connect the second open cable end to. I eventually found what I was looking for at Gordy's bike shop in phoenix, those guys have been there forever and they had a little cable clamp that worked perfectly with a set of 990 style calipers I had in the parts box. I would love to track down the original brakes though.

This was a ton of fun bringing back to life and I enjoy riding it often. I still consider this my brother's bike and I am glad it's still in the family so my kids and his, if he ever has any, will have more adventures with it. I restore to ride them not to let them sit, although I admit I am easier on this one than others. I am honored to have had the opportunity to show it on this site, thanks to Gary and all of you guys who have inspired me to remember a passion that once meant so much to me and still does.

Tires: hwa fong "Duro" reissues / wish we had the originals

Front sprocket: peregrine compact disc 44t / I have the original cd disk too

To check out more images of the before and after:

More Bikes From redzone (14 bikes in museum. View all)