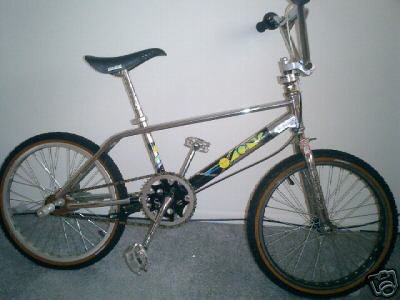 I was pretty stoked to learn about your web site and
amazed that you'd reference Ozone Freestyle. I think
Pete Brant gave you some background, but I'd like to
fill in the blanks. The following probably is way too
much information, but is kind of fun to write- bare
with me.
When I started Ozone it was out of a favor to a
family-run business in San Jose, Ca. The family (Hsu)
was importing low-end bicycles from Taiwan and selling
them at the San Jose Flea markets. A couple of other
bike importers had started at the flea market and had
gone on to being reputable manufactures. The Hsu
family wanted to follow this model and began the
process of upgrading their product line and made their
initial step towards marketing a new line of bikes.
I had some marketing and graphic arts background and I
was going out with the owners daughter and they asked
me help out.
I went to a bicycle trade show in Reno to check out
the bike market and saw a freestyle demo by CW and
Hutch. I was totally blown away.
I started hanging out at Golden Gate Park and Beach
Park Bicycles in Foster City on the weekends to check
out the small group of riders that were pretty regular
there. Skyway was just starting to sponsor a lot of
riders in Nor Cal and almost everybody wanted to ride
for them. I chatted with some of the riders and told
them I was interested in designing and building a
fresstyle bike. I asked them what they liked and
didn't like about the bikes they were riding.
I met a rider- John Ficarra who was into the technical
aspect of riding and he had some excellent input.
I was obsessed with the design aspect and came up with
a couple frame designs. I got more feedback. When I
arrived at a design I felt satisfied with, I went to
Taiwan to various factories to try to find a quality
factory that could produce a small quantity of high
quality bikes.
After some real horrific experiences I finally
produced the first Ozone bike. These were fluorescent
pink and orange, and a soft purple.
These models had Skyway wheels and Odyssey rotors.
Decent bikes for a first attempt.
I went to a lot of contests and started to put a team
together. I bought a quarter-pipe trailer thing and
proceeded to get some gigs.
I started advertising in BMXPlus and then moved over
to Freestylin' mag. Spike Jones (director) was 14
years old then working at Freestylin' as a part time
photographer and was being tutored by Wendy Osborne
(RL's sister) who was the main photographer for
Freestylin'. Wendy's dad ran Freestylin' mag. Bob Haro
started his number plate business in the back of the
Osborne's publishing business.
During this time all the major players- Gt, Haro, Dyno
had freestyle teams- Eddie Fiola, Dino DeLuca, et al.
Really solid riders that were all American, white kids
that wore BMX uniforms and helmets to ride ground and
ramp.
Most all riders were jonesing to look like these
sponsored riders but were a little concerned about
going to school in a BMX uniform; if you know what I
mean. Everybody wanted to look like hardcore skaters
but had these BMX icons for their freestyle heroes.
I thot the uniform thing a little misplaced for
freestyle riders and didn't want my team to have the
appearance of the rather constrained corporate teams.
I went to contests and saw some amazing riders that
were considered a little too ethnic or "free spirited"
to be included in the GT-Dyno flock.
I happily picked-up these riders and flowed them bikes
and whatever else I could acquire from our
co-sponsors- Vans, Rector, ACS, etc. I was warned by
some of the more convervative members of the AFA that
my relationship with riders like Dave Vanderspeck,
(committed suicide) Pete Augustin, and Craig Grasso
would put me at odds with the contest freestyle
community. This community resembled the skateboard
contest scene of the late '70's as it promoted its own
agenda over the changing freestyle community. Ozone
had become a haven for the hardcore and
disenfranchised.
I met Nick Philip at an AFA contest and agreed to make
T-shirts. He was going back to England if he couldn't
do Anarchic here in the U.S. as GT and Freestylin'
couldn't continue paying him under the table for the
ads he was doing for them. Anarchic Adjustment was the
only internationally known fashion company that came
from Freestyle roots. We opened stores in Japan and
worked with Jesus Jones, EMF, De-lite and became
famous (15 minutes) fashion designers. Ozone died from
lack of interest.
After hitting the one million dollar a season mark,
Anarchic eventually died from the strain of
continually staking it's future on the bleeding edge
of design.
I've included some pics of an ad I did back in 1988.
Hope I haven't bored you to death. I had a lot of fun
writing this- I haven't thot about these events for
quite awhile. I hope this will be a welcome addition
to the BMX Museum.
Also see ourgarden.com- a site I did quite sometime
ago- has a nice Ozone page. Also the "meet alan" page
is kind of interesting- hit the "next" button.

More Bikes From Anonymous (594 bikes in museum — View All)