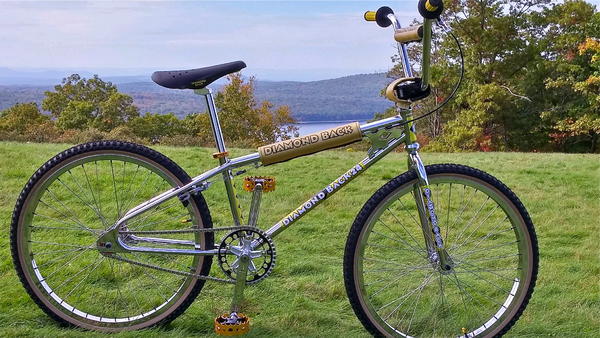 InhumanBMX & OZBMX got together to to create a special tribute to a bike they both thought was special. Limited to 11 WORLDWIDE! A message i received form InhumanBMX.......

" The concept was to create a 24 BMX frame that could be raced OR ridden on the street. A tough balance to get the correct geo for both. Original drawings were 1 to 1 scale so I could see the angles were correct and make any changes. Then transferred that to CAD. A Proto was made and beaten to a inch of its life, final changes were made before production. Tube sets were made in Taiwan and welded in Australia.The name Inhuman is my trademark but sold as the OZBMX Tribute F/F as i was out of the project by then. so I have the only Inhuman 24 proto".
I was " in line " to get one and was following the updates but something happened between the guys involved in this project and almost didn't get made. It gets fuzzy from there as I had to ' step out of line '. All of this was around 2007/2008. I have since then watched
" tributes " come and go but these were ALWAYS in my mind. As i raced my 83 SilverStreak BITD and always love Diamondback. Its was such a happy day when this show up on my door!! BIG THANKS TO....... TonyZ YOU ARE THE MAN!! ..........ROY A. THANK YOU FOR ALL INFO AND WORK ON THIS!! & XAVIER FROM OZBMX!!
AND NOW IN THE OFFICIAL 2015 BMX Museum Calender!!!!

More Bikes From ivegotabike (14 bikes in museum. View all)