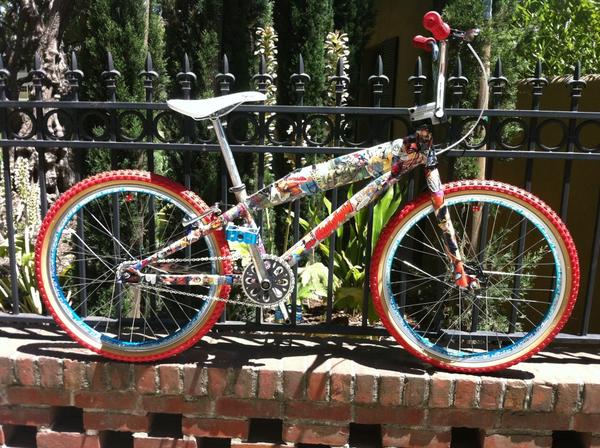 I picked this bike up at a police auction. I was mainly interested in the Odyssey T-1000 rims and GT Rhythm hubs, but of course I always like 24's so the whole thing had potential. Like so many of my bikes, I put this one straight into the project bone yard at home. It sat for a while and then I got an idea. I was thinking of ways to do a frame other than chroming, painting, or powder coating. I came up with the idea of doing a decoupage to it. This was the perfect candidate as the oversize aluminum frame tubing created a larger than normal canvas for a bike frame.

I could not decide what media to use, but finally went with comic books. I love all the Marvel and other comic book movies, but I'm not an actual comic book fan. I do admire and respect the artwork in them though. Growing up in the 70's and 80's the only comic books I ever read were Fat Freddy's Cat, The 40 Year old Hippie, and lots of Mad Magazines (Alfred E. Newman is on the back of the fork). So, I headed to my local Goodwill looking for the comics. I accumulated enough good candidates after looking through hundreds of them over the course of a few days and a few different Goodwill locations. I went with glossy finish pages as opposed to the older newsprint pages.

Being OCD, I cut out every little piece and lined them up just the way I wanted them. I applied it with Mod Podge Outdoor. After countless hours here and there over the course of a week or so I finally finished. Once I was done I added another couple of coats of the Mod Podge. Upon completion I took it outside and gave it several coats of clear coat UV protection. Just like a paint job it's subject to scratches, or in this case, tears. The good thing is that you can cover up a tear up by applying a new piece with a couple of shots of clear coat over it. I have several more bikes in the old project bone yard that will get the same type of makeover, but I will use a more efficient strategy next time.

Once the frame and fork were done I made some changes with parts I had on hand, many of them were new. I had the rims laced with new spokes (notice the horrible sunburst lacing on the front rim when I got it). The bars were some really sweet Hoffman bars, but they were to beefy to fit the brake lever on. I had some with the same look that worked out well. I also replaced the freewheel, grips, chain, pedals, tires, seatpost, padded seat, and added a brake set and the dice valve caps.

Like many of my buys and builds I think I'm going to sell them until I finish with them and can't let go for some reason. I was certain I was going to build and sell it, but after completion I was simply not ready to let go just yet. I love riding 24's and I'm proud of how this one turned out and like the way it rides too.

Here is the way it came home from the auction:

More Bikes From daddy-o (5 bikes in museum. View all)