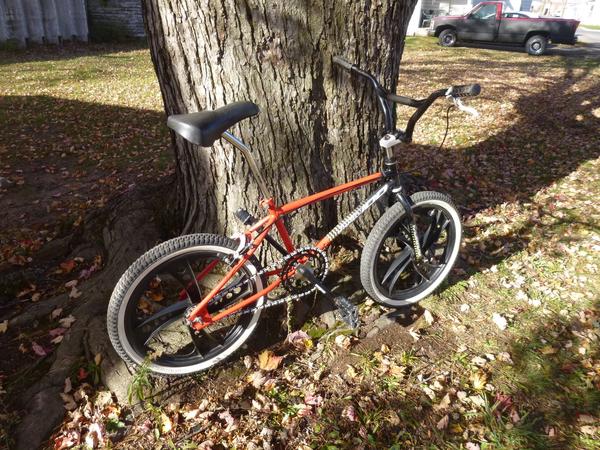 I've been keeping an eye out for a Murray with this style of rear triangle/drop out after seeing them on here. even though this frame is quite short these quickly became a fav among the "cheap" bikes. This was a really cheap craigslist score. The plan is a basic clean up and rebuild only keeping the forks. The rest will come from some stuff I have around or from one of my other "done" bikes that I plan to make some changes to anyhow. 11-18-15 update. After a quick tear down & scrub down I rebuilt it with black headset bits,a black ops seat post,mongoose cranks with a cheap 2 piece sprocket,cheap knee saver bars with a huffy stem that I repainted for another project,cheap but unusual plactic mags with "snake belly" white walls,and a repainted diacomp bull dog caliper with diacomp lever. The idea was to give it that "12 year old kid customized his cheapo dept store bike look". I switched to a white brake cable and plan to replace the seat at some point.