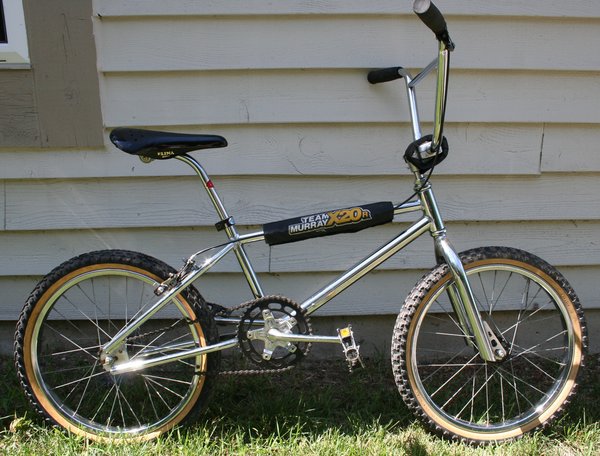 Did you know that some Murrays have decent entry-level/mid-grade parts?

That's the lesson here. I picked this Murray up a few weeks ago off CraigsList for cheap. I knew some Murrays have nice parts, so I jumped on this, bought it within a half hour of the guy posting it (he looked really surprised!).
-
Non-original parts on this: Seat post (says Pro-Neck, but who knows), Wald handlebars and foam grips, not sure about the Carlisle Aggressor tires. Everything else is original. This was not the upgraded model with the cromoly frame and the Araya rims. It has steel rims and is not a cromoly frame.
-
Parts of note on this: Elina seat, ACS seat post clamp and hubs, Takagi cromoly cranks 175mm, Sugino spider, KKT SMX pedals, ACS brute-style stem, MX-1000 style brake (some Murrays had Dia-Compes, but I don't think this one is). Just the seat was worth twice what I paid for this bike.
-
Riding notes: felt a little awkward for some reason. Probably due to the really heavy front end. Those forks are really beefy and I suspect are weighing the whole bike down. Due to the very heavy front end, I would grade this bike as a "D+" as a rider.
-
Too many good parts on this to keep it together. I parted it out this afternoon to use the hubs and seat now, and some other parts later.