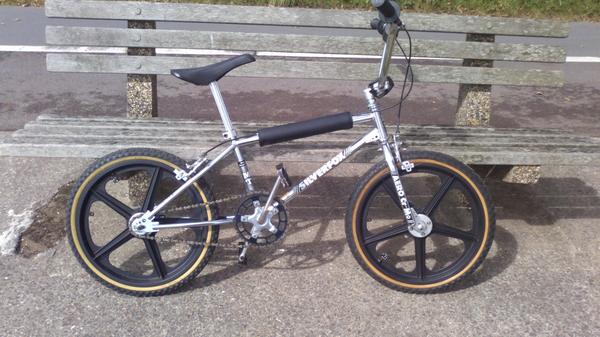 I had a Silverfox brand new back in 1983 and got rid of it some years later, something which in later years i regretted. This bike was found on ebay uk - and was bought to replicate my old Silverfox and to give me memories of the good old days - and my late grandad who used to help me look after my bike. This particular bike was obtained from Cheshire in the Uk from a collector who was thinning out his  Bmx stock. Hed purchased it a year or so earlier. The rear wheel was buckled so i took the opportunity to fit some period Aero zytec mag wheels in black -the same that i had done to my original silverfox 29 years previously along with a Nos plain pad set, Black odi mushroom grips, and a new Comp3 type rear tyre as the original was very worn,the front tyre is still the original from new.Ialso have a laid back post for when i have to ride the bike any distance. At some time in its life its had a black rather than grey set of brake cables fitted to the original Mx copy brakes. The rest is untouched and original - the chrome on the frame is in good survivor condition with minor marks and pitting in hard to see areas.The bars are peppered with pitting but are liveable for the time being.The decals arent terrible but also not  brilliant and are definately on the to do list. My aim is to have fun bringing it up to scratch and also cherish it and also on occasion ride it!!