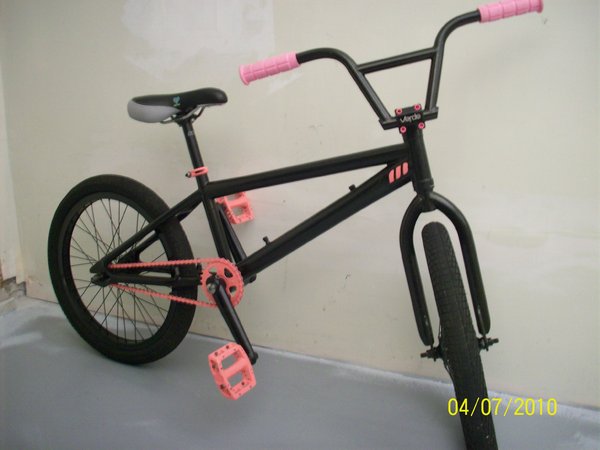 So, My good friend Brett has his own D.I.Y. bike shop at his place and while I was there one day, I decided I wanted a bike to ride. Being a female, and not really liking mountain bikes or road bikes, my natural choice was BMX. I had been into BMX bikes (an ex-boyfriend of mine was a flatland rider and even started his own bike company called Brickhouse Bikes) and skateboarding when I was younger. I then decided that I wanted him to build me a custom BMX street bike. He had a variety of frames to choose from and after much deliberation, I settled on a 2003 "Mosh" frame. I then had a hell of a time deciding on the colors I wanted. I really love "Sunday" bikes and the bright colors they paint their bikes. I had him paint it a combination of bright green and teal with pink accents...well, after about the fourth person telling me it looked like a clown bike or asking me, "why did you paint it THAT color"...I had him re-paint the frame, rims, hubs, spokes, forks, handle bars and crank arms a gloss black with a clear, gold glitter coat. I then, because I am a total chick and love pink, I decided on Montana "Bazooka Joe" (pink) for the paint accents, pedals, sprocket, seat post clamp and chain.