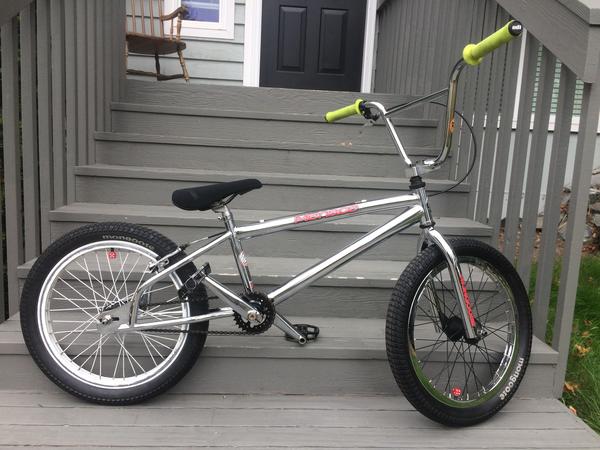 This setup came from the ghetto near Tacoma. Planned on keeping it original and tidy but the guy had 2.35 tires, walgoose seat and huffy bars....I've always wanted a new-school bike to try but could never bring myself to buy one. Figured I'd turn this menace into one instead.

Chrome on frame and forks is mint. Missing 1 sticker but no problems with the others.
NOTE: Mongoose 2.35 tires....they fit!!!
Rant 9" bars,
Supra j rims...rear painted by some Craigslist bmx dealer....figured I wasn't leaving there with my money anyway so I paid and left with the rims....they're ok structurally.
Mongoose embroided seat-nice.
3pc mongoose cranks and 29tooth sprocket coming in soon.
Coming from the late 90s and early 2000s the low seat is deadly but I'm digging the geometry of it. Feeling pretty stable with plenty of room to move with the high wide bars.
UPDATE, just got the beefy 3pc mongoose cranks in from Hallw6 and put the 29 tooth sprocket on NOTE: 29-13t sprockets just cleared the frame for those converting one in the future. Thisproject turned out quite nice I thought, might even blend in with the cool kid's bikes at the skatepark...

More Bikes From Brody (8 bikes in museum — View All)