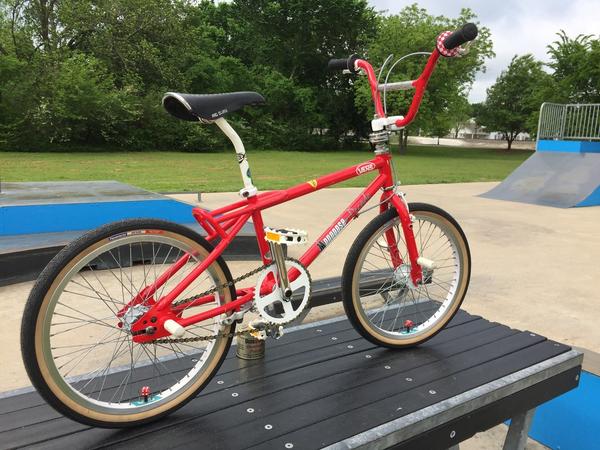 Last year for the Decade

Sold my too short TT Cool Streak on eBay and needed another project.  Since I like my FS-1 so much I jumped on this Decade when it came up as an original complete.  I used no paint on this project and although it was all original and complete, I like to ride my bikes so I made a few changes while keeping the original parts in the event I want to sell it later. Frame, fork, bars, stem, post, rims all have the original paint and decals. I added vintage product stickers.  All I did was clean and tune plus a couple comfort/style changes.

I don't favor low gearing so I removed and set aside the 90+% condition Tioga Japan 42T Compact Disc.  This gave me the chance to put some Redline cranks and 44T powder coated chainwheel on.  That had me on the run for pedals until I found these VP-777's in 9/16" in NOS condition in reverse color scheme.  I also elected to install new Panaracer HP406 tires and tubes as well as replacement inner and outer cables.  Added dice caps and donuts just because. I ride my bikes.

More Bikes From GasGuzzler (9 bikes in museum — View All)