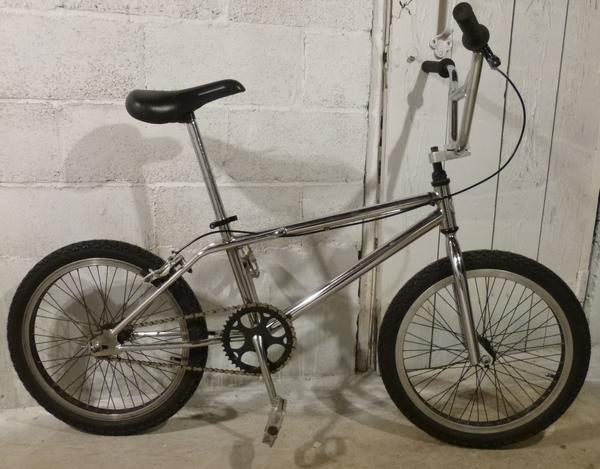 Well this was a $10 cl find up in the Detroit area. The intention when I got it was to use it for parts for my then 12 year old son's Hyper. He wore a hole in the rear tire after 6 months. When I brought it home it was completely covered in a spray bombed "candy red" (yes that's prob why) Anyway. After I swapped the only good tire to my son's Hyper it sat around for a couple of months until I found a cheap set of tires & tubes at Dunhams Sports. I got it going so we could ride in the snow together. That's all it took to hook me back in to bikes!! After a few rides I decided to strip it down,strip off the spray bomb paint & rebuild it. The tear down and and clean up of everything but the rims & frame went pretty smooth. After 2 attempts and 4 cans of paint striper later I still couldn't get all of the paint off of the frame. So I shelved it for a bit to focus on a few other cheap dept store bikes I found(the plan for those was to farm out the parts to other frames I might find) A few months after shelving the Villian a friend of my son got stuck with a yard sale Murry Whiplash that was not cool at all. I got suckered into building the Villian as is with some other parts I didn't care for & trading it for the Murry. As you can imagine I was kicking myself in the ass shorty after. About 8 months later (and buggin the kid about it for 6 months) I got it back after trading him an all black Hyper that I picked up for $15 that he liked much better. I let it sit for a bit before finally tearing it down again the scrubbing the hell out of it to remove the remaining paint & scratched up stickers. As of rite now the seat post & forks are the only original parts. The rest is stuff I pulled from cheap bikes & parts I've picked up here & there.

UPDATE; Just finished another rebuild with a black and white theme. The original brake calipers were covered in the same crappy candy red as the rest of the bike so decided to have a little fun with a repaint. I also repainted an old Huffy stem I had laying around. The "snake belly" white walls came off a cheapy department store girls bike.

Update; I decided all of the white was a bit much so the white walls,stem and front brakes had to go. At some point I plan to pick up a dif set of tires. Update-10-16; went back to the o.g. bars with a hefty but beat up dyno stem and crank set. picked up some Michelin j country's from amazon. these tires ride really nice and have great grip, all rubber is way better than nylon!