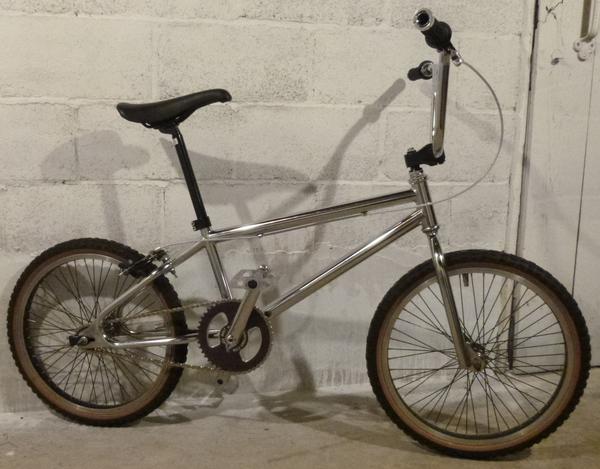 From the minute I decided to get back into bmx bikes as hobby, sometime around xmas of 2011, I just had to have a looptail Mongoose. It took a while to find one I could afford that was actually pretty decent. I cruise cl often like most of us. Sometimes I try not so local just for the hell of it. Thats how I found this one 80+ miles away in Ft. Wayne,IN for $70. Mostly original '91 Mongoose Expert Comp. Got it off a guy that said he bought it new for his kid in '91 and the only thing not original were the tires. However the front rim doesn't match and the hub is dated '93 (my guess is the original was damaged then replaced) It was quite dingy with a small bit of surface rust in the nooks. There are a few scratches here & there and the stickers are cracked,but overall the chrome looks really good. The plan was to clean it up & rebuild with the original forks/bars but swap everything else. I also planned to replace the original stickers with some 80's Californian stickers and pads just for fun. However..$200+ just for the pads & stickers is a bit much for a "just for fun" plan. At this point in the 3+ years I've had this one I have swapped out everything but the forks at least twice. Mostly a combination of coming into parts that are in better shape and also playing around with different stuff trying to get a feel for what I like best with this frame. One most recent look involved a few gold bits but I got kinda bored with that so I went back to chrome. I also swapped out the original,scruffed,and kind of short handlebars for a pair of Black Ops GT Performer knock offs I found on online for $20-shipped. Picked up a new Odyssey brake lever, a silver steel braded brake cable, and some cheap lock on grips. This has turned out to be a bit of a deviation from the original plan but I honestly love how this thing came together! It only took about 3 years to get it here, I have no plans to change anything. The only thing might be to add a nice set of black pads. '91 Mongoose expert f/f Black Ops GT Performer bars generic front load stem generic wheel set Duro tires Odyssey brake lever Proponent brake caliper KMC chaun Sharp 44T generic chrome 3pc