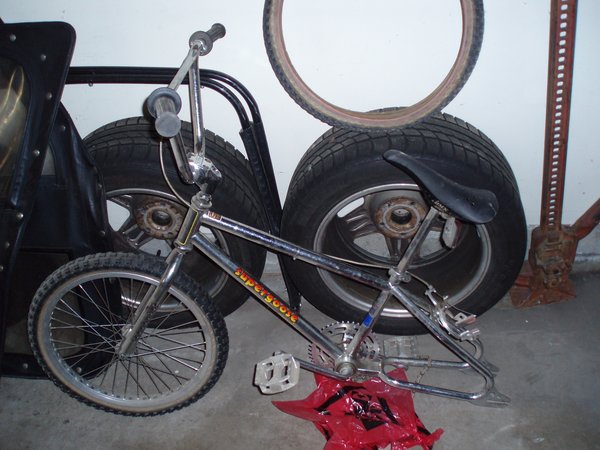 All original BMX Mongoose Supergoose. I am the original owner.

How I received this piece of BMX history is pretty neat. My Dad bought some raffle tickets from our church. We won I believe the grand prize which was a brand new Mountain Bike. Keep in mind this was the mid 1980's so Mountain Bikes were just coming out, were very pricey and of course very big.

My sister was three years older than me and we pretty much new she was about done with her bike riding days. Still my Dad tried to see if the Mountain Bike would work for us. It was just way too big for me, and was too big for her too.

Since he couldn't swap it for cash at the raffle he headed down to the bike shop. He told me he would go swap it for a dirt bike. Little did I know he was going to come home with a brand new Mongoose Supergoose. Bye bye Huffy, I am playing with the big boys now. It was great, all my friends had Diamond Backs and Redlines. Now I had a Mongoose and life was great.

Even as I graduated high school I fought the Mountain Bike craze as much as I could, finally giving in knowing I was going to a mountain town for college and needed something with gears. I think I last rode this bike in 1993 or 1994. At that point you didn't want to be caught dead on anything but a Mountain Bike. I hung the Supergoose up in the garage and it stayed there until September 1, 2007 when I brought it to my home.

Now I am going to go through and do my best to restore this piece of BMX history and then see where that goes. I may be old now, but I'd sure like to hit a few of the trails near by and get some use out of it before passing it on to someone else.

I have a lot to learn aboutt his bike as I just rode the hell out of it when I was younger. All the specs are something I will try to get figured out in the near future.