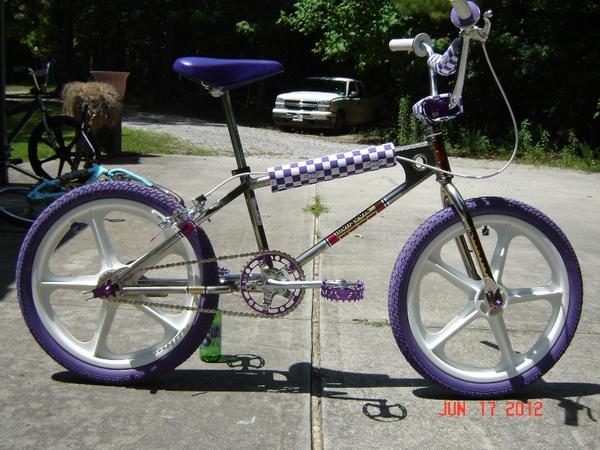 I got this frame/fork a few years ago from my childhood best friend. His young son was not interested so my buddy gave (free!!!) it to me. This is a 1979 Mongoose nickle finish frame/fork that he bought used when we were about 12 in 1982. The previous owner had rattle canned it blue so we stipped that off and never stickered it, just built it up and rode it. Since I received it, I spent about eight hours fixing dents and bends and bringing the finish back, and stickered it for the first time in 30 years. My wife decided she liked it so we built it up this year for her and obviously she LOVES purple. The true OS stuff is the F/F, Redline Bars, DiaComp lever, Sugino 1 pc crank and spider and chainring bolts, and Tioga 28tpi BB. The rest is modern stuff, but made for a fun bike/fun build that she likes.

More Bikes From mxfan69 (11 bikes in museum. View all)