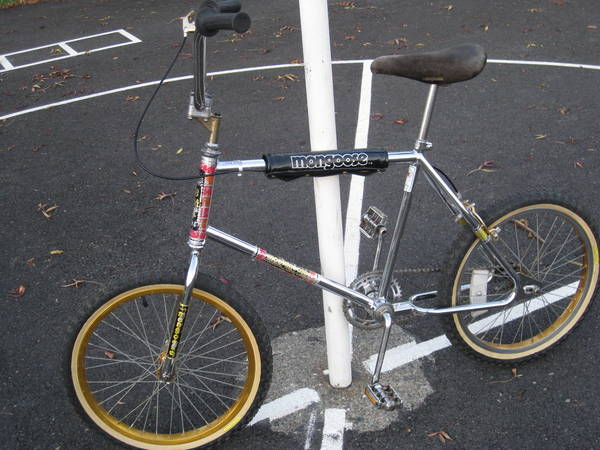 Lucky find and an amazing ride. Absolutely the most unique bike I have ridden to date. Nothing else feels like a Moose!

I found this bike at my local bike "recyclery" on a random day. I frequent our used bike shop every other week or so and on this particular Sunday I happened to spot a Moosegoose sitting in the used bike area. I assumed someone rode this in to show it off or one of the store owners had it as a trophy piece. Upon closer inspection I noticed the tires were flat so I inquired with the guys running the shop to see if it was for sale. Apparently, I walked in 15 minutes after this bike was dropped off as a donation and it indeed was for sale (it would have been cool to hear about the bike from whomever dropped it off). I purchased the bike, took it home (called my brother about 15 or 30 times to talk about it) and then filled the tires up with air and took it for a spin. This Moosegoose was pretty close to original condition. The only things I have upgraded are the grips (which were mountain bike style grips when found) the tires with repop tioga Comp III tires (originally were one gumwall and one blackwall Comp III style when found) and a rider Mongoose suede seat (which was a mountain bike seat when found). Hopefully I can find some Mongoose snake belly tires in the future. My gut instinct when I first found this bike was to strip it, clean it and go with repop decals etc. but I am really enjoying riding this bike as is. It feels and rides great. I have since repacked the headset, hubs, bottom bracket and pedals. I have also cleaned it with care and gave the pedals a vinegar bath which brightened them up nicely. It's riding like a dream. I plan to put a lot of miles on it.

If you get the chance to ride one of these bad boys I highly recommend it. It feels like a cruiser, a folding commuter bike and a 20 inch bmx all in one. Very unique and very fun.