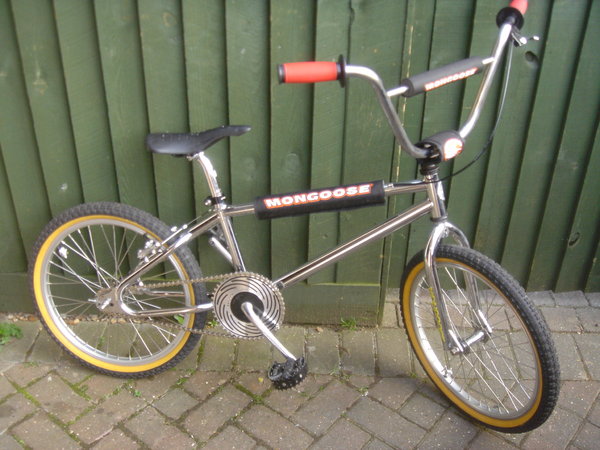 This was a very cheap score off ebay UK, I just had to rescue this bad boy! Always had a soft spot for an old neglected Mongoose! The photo and listing was very poor, but I could see it was a loop tail 'Goose so took a chance. I went to pick this up from an address in S.E. London after the office and took a few spare parts, basic tools & a pump with me so I could fix it up quick (which I did in the street outside the seller's flat) & rode it from Elephant & Castle across London Bridge in the dark to Liverpool Street Station so I could get it home on the train. Got few funny looks on my evening commute dressed in a suit pushing a beat up BMX onto a crowded rush hour train lol.

A real Rat looker, but underneath what must be the worst black rattle can paint job I've ever seen, was a chrome plated loop tail frame that from what I could see appeared to be in very good condition, complete with all the original decals.

Is this the last loop tail frame Mongoose ever made?

It was just missing the seat post, clamp and saddle, left hand pedal and complete front brake set up. Had original Mongoose rear wheel and replacement Alex X303 on front, both also covered in black spray paint and what looked like splashes of white gloss house paint. The rear had some bent and rusty spokes but still ran true. Will refurbish and clean up the wheels for my spare parts bin. Other than that the bike rode fine once I threw on a few parts. The last pic shows the bike roughly "as found". I took off the grips and brake to clean up before photo taken. I want this to use as a daily rider and to practice with on the local race track and skate park, a cheap lightish (26lbs) bike with old school looks that I don't mind getting beat up a bit!

Built up over Christmas holiday as and when I got bored with the festivities! Frame was stripped with Nitro-moors and then polished first with wheel & then by hand with Autosol, it took me several days and many hours to bring to it's current shine as the paint was very thick in places and some of the chrome a little dull and pitted especially around the bottom bracket area. After stripping the frame the decals were a little to far gone to save so I removed them but I kept the ones on the forks as these were not painted over and not in too bad condition. I went with a Black 'n Chrome theme.... Not a bad looker for a cheap beater...... So far stands me in less than Â£50 all in.

Compare the first and last pics for "before & after"

More Bikes From Funky-Monk (16 bikes in museum. View all)