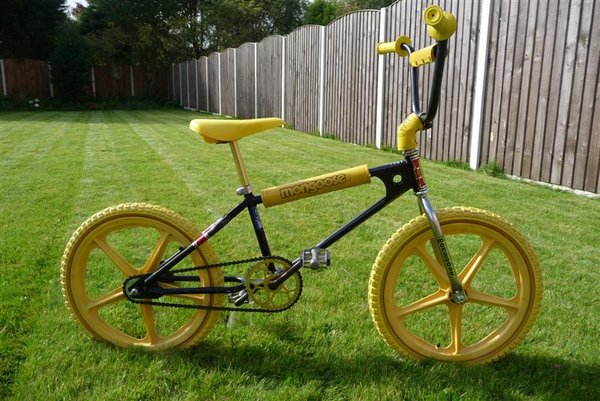 I decided to do this as a 100% survivor build
I imported this frame as part of a complete from the states to the UK last year as a donor build. It was a very cheap buy it now for a complete and the guy offered very cheap postage so I jumped on it as i wanted lots of the bits from it. So I stole everything i wanted from it for other builds and was left pretty much with just the frame and forks.

............Fast forward a year and by accident, more than design, I ended up with most of the bits to put her back together in a similar style but with some slightly different parts and a few personal tweeks.

I took a little bit of inspiration from the 82/83 catalogue cover picture with the yellow tyres in place of the black as I liked the look of it with the yellow compII's but I couldn't find any so I went for some nice cheng shin knobblies in yellow to give a similar-ish look.

The bike is a total survivor including original paintwork and decals (check out the funky bike license seat tube decal) - there is not a single NOS part on her and there has been NO restoration or paint touch-ups at all - just some hot soapy water and a bit of a polish !