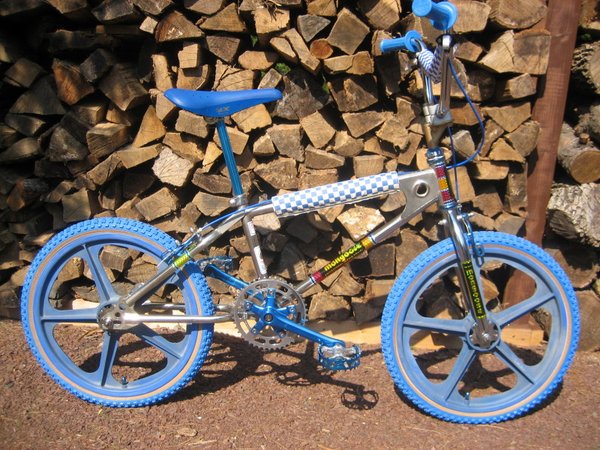 My childhood 'Goose, received at Christmas '81 when I was 8 years old.

Between 82 & 85ish, it was modded into pretty-much the exact bike shown here. From ~85-86, I got 100% into freestyle & it was bastardized into a psuedo f/s bike & all the original mods were broken, worn out, or traded away until all that was left was the frame.

The only original surviving parts are the frame, seatpost clamp, & the frame pad... both of which took up residency in the top of my tool box for the past 20+ years.

A few things aren't quite right; the stem is a generic double-clamp that I stripped, Metalcasted, then added new hardware & the Maurice decal. The bars aren't Redline, as they were BITD. And it had a blu/wht checkered ShotGunII seat & MKS Grafight-X pedals. Other than those things & the fact that I replaced the trashed original decals w/ Team decals, it's as it was c1985... right down to the headset lock & blk/slvr Tech2 levers.

I have to restore the Tuffs, restore a pair of blue KKT Lightnings, & install the 1st gen Skyway Tuff Pads... & find a blue Haro Series One plate (yeah right).

Still have the original owner's manual, too.

More Bikes From chad.gt.pfttm (10 bikes in museum — View All)