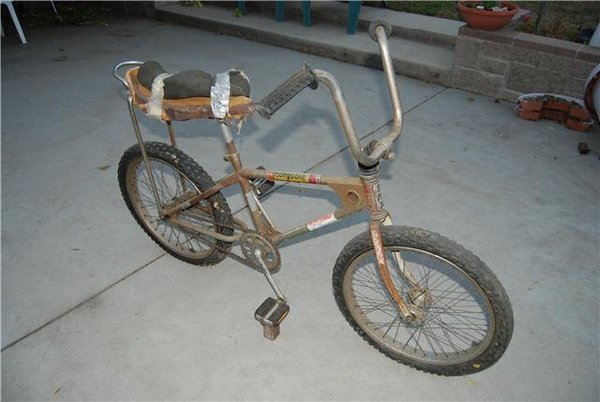 This Mongoose belongs to Mel Stoutsenburger. Mel is a seminal BMX pioneer from the San Fernando Valley in California. He was a great racer in the earliest days of BMX and rode for Rick's Bike Shop among others. He also worked for Skip Hess at BMX Products along side of Rick Twomey during the early years. He was there from the beginning as a top racer and as an employee for one of the most important companies in the history of the sport. This is pretty much how some of the the first bikes were being raced back then, Banana seats, "Ape Hanger" bars and rubber pedals, etc. Notice the flared seat stay "Triangle Brace" which is indicative of the 1975 Mongoose. Keep in mind there were only 3 or 4 months of production where the frames had this feature. The brake tab is the original two-ply "Trapezoid" shape which was a characteristic of the very first run. Later versions of the '75 eventually came out with the one piece "Flattened Hourglass" shape which continued until brake tabs were phased out entirely sometime in 1979. This is probably one of the most important BMX bikes in America in my opinion... Not only is it one of the first factory made BMX frames ever manufactured, but it is also a perfect time capsule which has survived in it's original state, just as Mel raced it, some 34 years later.