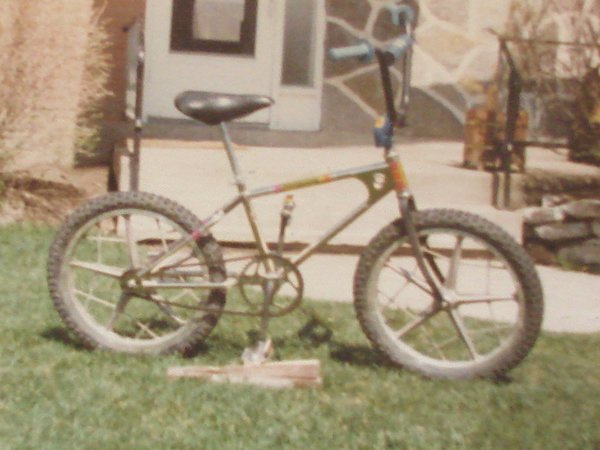 This was my first real BMX bike. A little blog here to explain...

I grew up in Canada before moving to the US. After a couple years of modifying 20" CCM Mustangs with my pals for "dirt riding", my father and I were lucky enough to get in direct contact with the legendary Skip Hess. It was late 1975. Skip spoke to my father and I a couple times on the phone and eventually sent us the very first Mongoose ever shipped to Canada which we picked up the following spring. We had to drive across the border to get it because Skip had no export license for Canada at that time. The Mongoose "Kit" was marked as a "Sample" of the new BMX bicycles he was producing from his company in Southern California. This all came about because I had relatives who lived in the San Fernando Valley and I was eagerly learning about the new sport officially called "BMX" that was happening down there. Nobody in Canada seemed to have heard of it. I had begun reading all about Motomags, Webco frames and Redline forks that the kids were started to buy and race with in SoCal... That's how I first heard about Skip and why I begged my dad to try and reach him. Miraculously he did! Anyhow, after receiving a full blown Mongoose "Kit" directly from the man himself, it goes without saying, I was the happiest damn kid in the whole world! To this day, I can never thank him enough for treating me like I was someone special (even though I was merely a delinquent 12 year old boy from Canada). We had no organized racing back then up in Canada, but I rode that bike upside down and sideways for years. I even made the local papers for jumping over 12 friends lying down in a row! I'm sure many people in my old neighborhood will never forget that old Mongoose, including the cops! LOL! My dad stayed in touch with Skip for a while and eventually visited with him in Chatsworth a couple years later on business. He always spoke very highly of him. In 2007, my dad was diagnosed with Acute Leukemia. During this very difficult period, we discussed a lot of old memories including Skip Hess and that old Mongoose. It was then that I got back in touch with Skip and became interested in collecting vintage Mongoose bikes. Sadly, my father passed away quite quickly but he did enjoy seeing my interest in the early stages of my Mongoose collecting and especially hearing that Skip and I were in touch. Pretty much every build I put together reminds me of the best times I had with my dad. That's why I love doing this. I've also really enjoyed getting to know Skip quite well in these last couple years and sharing pictures with him of these old bikes that I've been rebuilding. Visiting with him and his family last year in California was a real honor for my wife and I. Skip Hess is truly an incredible man and I'll never forget how he has touched my life and helped the bond between my father and I become even closer, then and now.