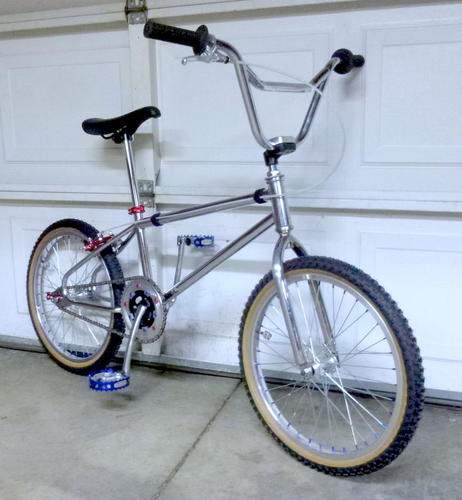 Picked this one up as a mostly original, complete bike, locally from FB marketplace for $90! The only OG parts not in place were the wheelset & seat. Non of the components in place were worth reusing so I rebuilt it with stuff I hade around, mostly. After tearing it down, removing the damaged OG decals and giving the frameset a good scrubbing I did discover that the chrome is quite scratched & hazy with some rust in the tight spots. Rummaging through what I had on hand I noticed that I had a few bits in red anno and others in blue anno which, matched with the chrome, reminded me of the typical engine compartment of show cars from the '80's-mid '90's. So I ran with that. I already had the brake setup; Dia-compe brake caliper & Tech77 lever and braided metal brake cable. Also on hand was the crankset; Porkchop cromo cranks & unmarked disk, mid school Mongoose 44T chainring, and VP pedals. The bars are also mid school Mongoose (also on hand) with AME tri grips. The SR-422 stem was scored on ebay for $52. The wheelset are Weinman 4019's with new nipples for some color and a set of 1.75 Kenda true gumwall Comp III's. The rest of the bits are an MX repop seat clamp, generic padded seat, Black Ops cromo seat post, KMC coolchain, and some dirt cheap chainring bolts. Future plans are to tear it back down and paint the frameset, probably black or midnight blue, then throw it back together with the majority of the current parts.

More Bikes From ramblinman (21 bikes in museum. View all)