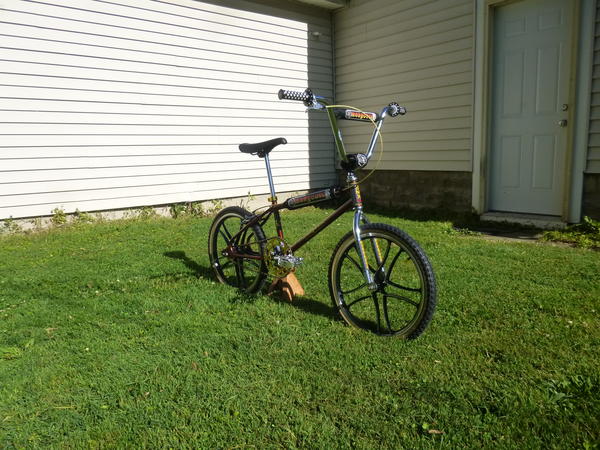 The 83'-84' Mongoose Cali, chrome & black, black pads, with a set of black Skyways was THE dream bike when I was a kid. I love the look of chrome with black parts to begin with, but add the hombre'd orange/yellow lettering, the stars, and Maurice to the pads and decals and I was hooked. Since getting back into bikes a few years ago the 1 bike at the top of my wish list. However for several reasons; my usual budget, the cost of a complete Cali already built to my vision (or even just a nice frame set), and lack of saving discipline, getting caught up in less expensive projects, made it difficult to achieve. Having a few bucks in my pocket thanks to cashing in a 401k I decided to put attaining a Cali somewhat of a priority. One evening just casually cruising the for sale section of the site I came across this sweet custom painted Cali frame set that had just been posted for $250!!! I instantly clicked buy now without hesitation or even fully inspecting all of the pics. Even tho it isn't chrome I could easily see building it up as something very similar to my childhood dream. As time went by and funds became available I gathered up bits and pieces that fit the vision I had. But as with all of my projects the vision changed a few times. At 1st I wanted some red and gold bits to with the decals. The red wasn't working so I nix'd that in favor of more silver and black. I had scored a set of black Skyway Tuff II's on Amazon for $70, but for some odd reason I could not get any of the tires I had in mind to fully seat to them. So by default I ended up with the midschool Mongoose exclusive Skyways original bought for a Mongoose Expert on eBay for $100. I've had the Duro Comp II's for some time. The crankset consists of an SR tubular cro-mo OPC and Tioga BB bought from the site for $75, and a nice but cheap 46T alloy sprocket that was intended to work with the 5 spoke Skyways I planned to use. The brake setup is a Dia Compe caliper, a new school Odyssey lever and Jagwire cable. For now I have a Powerlite stem, SE Racing bars with A'ME triangle grips. And of course a must have for this project is the signature Mongoose pads, that to me, makes a Cali iconic. A nice OG set is hard to find and tend to be quite pricy, luckily I managed to find a repop set on eBay for $70. All in all I am really pleased with this build and very happy to finally have a Cali. Future plans are to possibly replace the bars with some Pro Class bars, and to maybe repaint the rear triangle where there are a few nicks and scratches, possibly in a 2 tone similar to an 87'-88' Cali. UPDATE; I decided that the black mags, as nice as they are, were a bit too much black. So I decided to try the gloss black/aluminum walgoose mags I've had for a while. Yes they are a bit hefty, but its just a cruiser so no big deal. I dig 'em. to me they look almost factory. I wasn't feeling the sprocket or chain anymore either. Took a while to catch one at a good price, but I finally scored a suntour chainring. I mated that to a porkchop spider and a black and gold izumi chain. I also swapped the powerlite stem for an SR I originally had on another 'goose. Much happier with the new look.