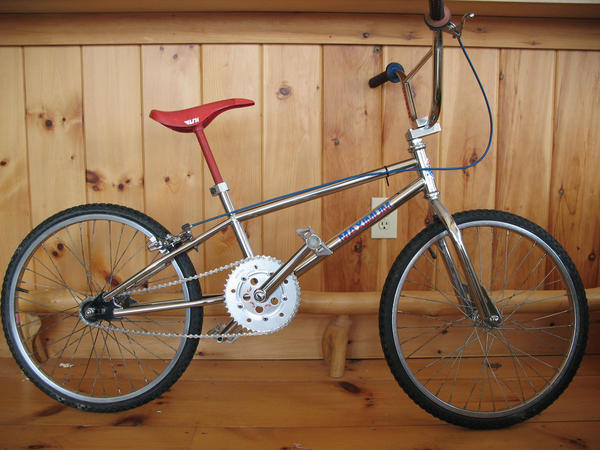 Elegant, Rare, Chrome to the Bone

This is my custom build from 1985. I chose all the components and had it built by a local bike mechanic--this took forever. I only raced it one summer. I had not ever ridden Maximum--I chose their frame based on looks alone! (There was an older rider with a Maximum who raced the indoor tracks at Northhampton Fairgrounds who just ripped, and his bike looked sick.) I still think the frame and fork have the most graceful lines and is the most beautiful BMX frame ever built. I had come from a Kuwahara KZ-1, and I think I was faster on the Kuwahara, but that may have been because by the time I finally got my custom Maximum I was too big for 1 3/8 rims! The chrome has chipped off a bit on the fork (which I have tended to) --this was from a crash in the 1985 MA finals when I landed on the holeshot winner over the doubles in the third turn in Greenfield, MA. The sticker on the other side was burned off in a crash during the first moto of the same race, when someone behind me knocked me sideways over the step jump! Got a mouthful of dirt! Were it not for those two crashes I could have had a no. 2 MA plate. Ended up with No.5 Fun sport, full of important lessons about life