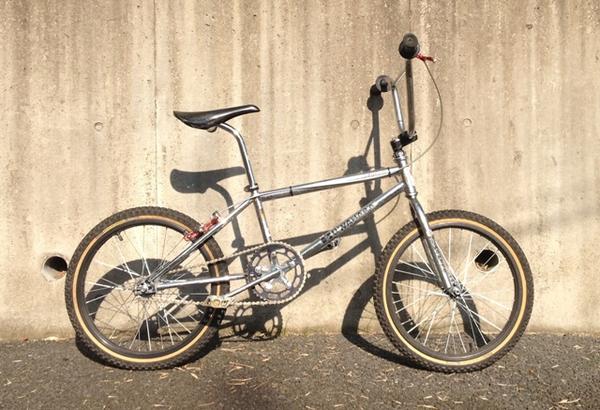 I’ve wanted a Laserlite since I first saw one bitd. A kid in my hometown had one and I got to see it a few times but never rode it. When freestyle became popular he bought a CW Freestyler (which I subsequently bought) and the Laserlite was consigned to the back of his garage, never to be seen again.

Fast forward 25 years when I got back into the old school bmx scene, and the memory of that bike remained, which grew stronger in 2009 when I moved to Japan, the home of Kuwahara plus Tange, Araya, Suntour, Sugino and all the other famous Japanese brand names. I dreamed of stumbling on an old, abandoned Laserlite (or any Kuwahara) but although I saw some decent examples in the old school bmx shops and meetings I visited, the elusive barn find remained just that. I therefore bought myself an ’87 Haro Group 1 as my weekend rider and started looking for other bikes to satisfy that old school craving, though would always have a look at the latest Laserlite build or score posted online. One of the latter popped up in September 2013, a KZ-83 with oval tubes and original, if well-worn decals. The rims and bars had long gone and the seat post was stuck, but the Suntour stem and “broken arrow” clamp were still there. The bike then went up for sale but without overseas shipping, so I forgot about it. Then a few months later another ’83 popped up for sale, which turned out to be the same September frameset, now missing some more parts and sporting a small dent in the right, rear stay. On the plus side the seat post was free (the cause of the dent), it was sitting on some newly-built Z-rims and more importantly, overseas shipping was offered, so negotiations were started and a deal was made. So, after about 30 years coveting one, I had finally got my own Laserlite, which was also going to be returning home to Japan, 30 years after rolling off the Tokyo Kogyo production line, they being the company who fabricated many of the earlier Kuwaharas.

Since I had wanted a rider, not a carpet queen, neither the lack of original parts nor the dent was a problem, though the more I started looking for the parts I needed to complete it, the more I got sucked into buying things I hadn’t originally planned or budgeted for. Another complicating factor is being based in Japan, since a far greater and cheaper choice of parts is available in the US and Europe, so I have go through the added hassle and expense of shipping to Japan or alternatively, asking friends and colleagues to bring stuff over for me in their luggage.

Given the condition of the frameset and the fact that it was raced over in Massachusetts bitd, I wanted to go for the survivor racer look, with a bit of an America flavour. Ideally everything would be survivor condition but the bike has taken over as my weekend rider, so consumables were replaced but apart from the Panaracer tyres and tubes, Izumi chain, Shimano inner cable and Nitto layback, everything is from the 80s. I particularly like the battle-scarred Haro Tech plate that I picked up on here, to which I’ve added a few decals. The Laserlite black and chrome colour scheme is a classic but I wanted to add a little bit of red to accent the rising sun decals. It's not a factory-spec example, but I couldn’t afford one of those 30 years ago and still can’t now, so am just going to enjoy riding my grail bike as much as possible!!

A big thanks all the members on here who helped me out with parts, especially Vazquizzel for a) selling the bike to me b) building the Z-rims and c) shipping the bike back to Japan, plus Natsukashi BMX and Screamin’ Wheels, both in Tokyo. Much appreciated guys!