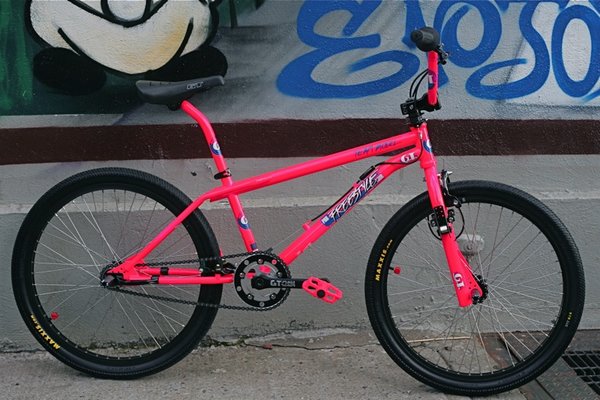 Here is my Knight Bike Co. Proformer, built up as a GT Pro Freestyle Tour. It started with the limited production freestyle cruiser F/F made to honor one of the most popular bikes from BITD. In the interim of accumulating parts, I sent the F/F to my good friend Joe, owner and operator of Brooklyn Machine Works (BMW) for a couple of modifications. He welded on the gyro tabs and fork cable guide and it was a top notch job as usual!

I briefly owned an original GT Performer BITD, but I wanted to go in a different direction. Thanks to Aleks (Acuzer), Rividude, DemonGT, Floofy and others, I really love the 87 GT Pro Freestyle Tour Team Models, so I modeled this build after those bikes. As with most of my builds, I utilized a combination of used/restored and NOS parts. The bars are custom made one off's (actually, 2 off, as another member here picked up the only other set made) by Chip at C4. Chip is also responsible for the sick dayglow powder coat job on almost all of the parts. I'm not sure what the color name is though, as it's hard to nail down, but Chip states that this is a factory GT color. The bikes color is like a Chameleon in that it changes color (sometimes drastically) in different lighting! It's really difficult to get consistent looking photos (in terms of color) since it varies with the type of lighting available. Three of the images used above appear to show the bike as pink due to being shot on an overcast day, which is not an accurate representation. The other image was shot on a sunny day and shows the color variations beautifully!

Decals are the PFT versions from AJK. As much as I like the OG Performer decals from 84/85, I really like the PFT decals from 87, so I went with those! The Power Series crank decals are silver stencil decals from ultrahive (typical excellent job). I wanted to reverse the original black on silver of the GT cranks, so I went with Siver on Black. These are knock off cranks as this is intended as a rider! I picked up the GT threadless stem from evil bay and left it as is so as to retain the GT markings. I really wanted the custom mallet stem made by IronHide in the 1 1/8" size, but he only made 3 and another member here was lucky enough to pick up his last one just recently! I think it would have put this build over the top, but I'm satisfied with this stem's look and where it positions the bars.

True GT parts are as follows: the frame & fork standers, Pegs, GT stem, GT stem compression bolt, GT seat, platform pedals, Chainring/Chainring bolts and of course the GT high flanged 48 hole hubs mated to Sun rims. The extra weight of this heavy duty F/F (not to mention my extra weight) kind of warranted the 48 hole wheel set. Also, I think they make the build even more unique as I really haven't seen a cruiser with 48H wheels before. The front brake is a genuine Nippon (which I restored - powdered black and painted in the white text) and NOS Tech 77 levers from Ebay. There is also the NOS Black lower Gyro cable with a newer black upper cable. I sent the wheels to Dan's to get built and asked for black spokes with the stock brass silver nipples, but they messed up the order and went with stainless Spokes instead. I was initially disappointed, but I grew to like the silver spokes and think they pick up on the silver power disc nicely. I went with Maxxis DTH tires since they resemble a freestyle tire and I must say they roll like a dream - smooth as butter!

All in all, she turned out as great as I envisioned and hoped. She also rides like a dream! It's a solid built machine with substantial weight that implies great strength, but it's to be expected from the beefy tubing and dropouts. I'm quickly regaining my riding confidence with this bike because it rides so well and at 6'2", it fits me to a T.