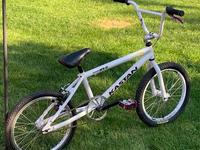 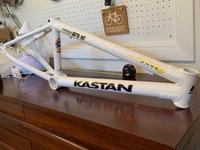 Kastan What can say I seen one in 92.. super lite and dude that was riding one was flying..

2022! Updated Frame to original white color and decals… 96 kastan bought in 2012 from a buddy that was getting out of the Bmx deal..the candy blue felt had to go! The bike was together early on when it was blue the bike felt ok at the time but found out later running 8”tall bars was part of the problem, so at that time I took the bike apart feeling that the geometry of the frame was not to my liking it wasn’t until my later builds I kept using the 8”tall bars and also my other bikes things just felt off, long frames and short bars were just not vibing! So I had to go with some changes.. It felt ridiculous to go with taller bars since 8” tall s&m slam bars was all I known I bought  9” bars and well what a difference! Riding 9’s on my other bikes felt great and handled alot nicer and jumping felt relaxed, so I had to give this gem another go, got it together w parts laying around it’s not period correct but it’s a racer! Steering feels good I don’t feel hunched over rig is dialed =D enjoy the pics Bmxers! 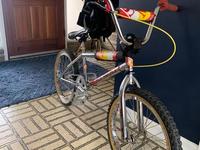