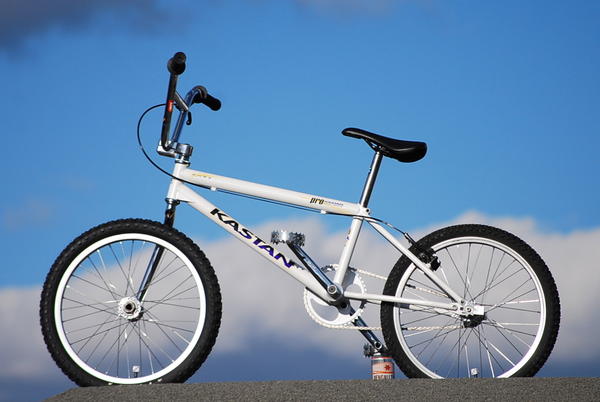 Little story behind this one. This used to be my green 1989 KEX Pro-S which cracked in 1993. I got on the cover of Mountain Bike Action magazine in September of that year while wearing Kastan race pants. At the InterBike tradeshow I showed the cover shot to Linn Kastan who offered to send me one of his new chromoly Squareback frames for the free marketing he got from the photo. Right when I got the new frame from Linn I noticed that my green frame had cracked. I called Linn and he said that he would fix the frame for me if I sent it to him. When the frame came back he had fixed the crack, replaced a smashed cable-stop and the old brake bridge which had been flattened from years of brakes coming on and off, welded canti brake mounts to it, painted it white and stickered it up with the newer generation logos. Since I was riding the Squareback now, I put the frame away without ever building it. It hung on the wall with an almost NOS strut for 15 years until I finally got the parts together to build it up, so here's the spec sheet:

Check out the big brother too: http://bmxmuseum.com/bikes/kastan/64088

More Bikes From bmxmarty (48 bikes in museum. View all)