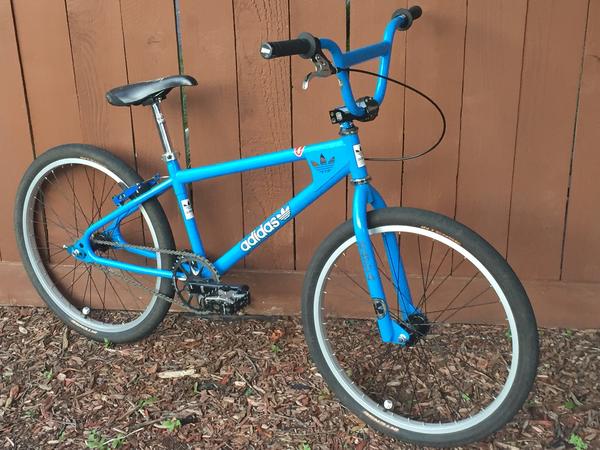 My second and final grail.  About three years ago, I came across a photo of one of these, and fell in love.  I don't remember if it was on the now-defunct Kappa BMX website or someplace else, but I knew that I would try hard to make one mine.  Problem was that the bike is EXTREMELY hard to find.  Not only do they number about 70 worldwide (I've read estimates as low as 50), but they were never sold to the public.  Kappa BMX out of Kalamazoo, MI was comissioned to make these bikes for Adidas to be displayed in select Adidas Originals stores around the world.  Plus, with the bike being not only rare, but a Kappa as well, I knew that even if I was lucky enough to come across one, I'd have to come up off some major coin to make it mine.

Fast forward to November, 2011.  A Google search of "Kappa Adidas Cruiser" lead me to the VitalBMX website, where a Chicago guy posted that he had one, and would like to know how much it was worth.  I responded to his post, but never heard back from him.  The following month, one out of Vancouver popped up on Ebay with a BIN of $1650.  I knew I was way out of my league, but I PMed the guy anyway and tell him that I would give him $1200 if I could sell my then yet-to-be-built '84 Skyway T/A XL frame.  Well, as many of you know, I never sold the Skyway (built it instead!), and someone else got the Adidas despite my best efforts.  Back to the drawing board, only this time, I figured I'd never get my hands on one.

Then came March of 2013, just over two weeks ago.  My Museum PM box displays the title "Kappa x Adidas 24" from a user I had never heard of before.  I open the PM to find that it's the dude who had made the post on Vital BMX!  He tells me that he still has the bike, and lives in the Chicago area.  GAME ON!!!  I ask him to email me some pictures, and we set up a meet.  In the mean time, I sell a few things to position myself to come correct.  On Thursday, April 11 2013, I pick the bike up for an unbelievable price.  I will be making changes to it in the near future, but couldn't pass up the opportunity to mock it up, share my story, and make it the first one of its kind in the Museum.  Smiles for miles, let me tell you!

I made a few changes, so here's the parts rundown:

Odyssey forks (made for Kappa)

More Bikes From perront (24 bikes in museum. View all)