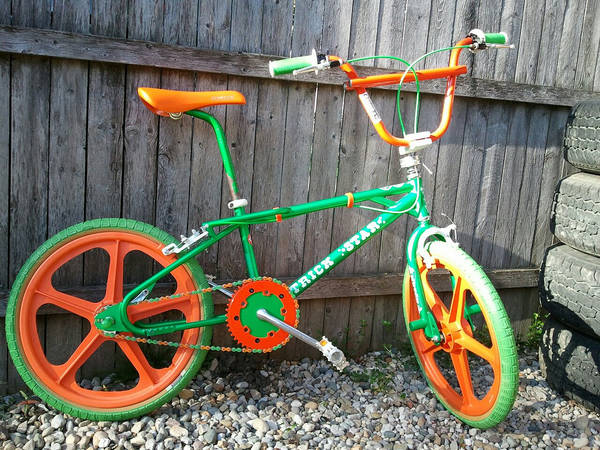 Custom painted by me as a replica of one I had painted when I was a lot younger.

In about 2004 I was buying up some different colored CW freestyle bars just to make a display on a wall in my house, just because I have always liked them. I bought a set of black ones and the guy I bought them from, Lou, had the rest of the bike to sell me if I wanted it (and I did!) and he introduced me to vintagebmx.com. After seeing some of the bikes and stuff on there, the first thing I wanted to do was re-make my old Trick Star that I had as a young teen. That was the bike I first had a set of the CW bars on, orange ones just like these. I had this orange set already, so that was the start. My original TS was an american f/f in white with green and orange parts on it that I got in '85. In '86 I had some friends of my dad that owned a garage paint the f/f for me. I wanted it a Haro green but they did in in this candy green, which was a surprise to see it, but fine with me. I still had my old seat post from my original bike that I had painted green too, the broken brake levers a pedal. I ended up not putting those parts on this bike right away, but they're on there now. So I started from there. I had the bars and started looking for the rest. Some of the first parts I found were the rear NOS coaster brake orange Tuff II, the green Hutch tires, the ACS Mini-MTN levers, the orange Tuff Neck chainring and the Mushroom II grips. I ended up buying a set of the new orange Tuff II's just to get the front mag, which matched perfectly to the 20-something year old back one. I eventually had most of the parts before I even had a frame. I knew I was going to re-paint whatever one I got this green so I wasn't looking for anything nice, and would have really liked using an american frame, but I came across a really beat up chrome japanese one for a good price and it was the way to go. I stripped down some super crusty old white forks and painted the F/F myself with these House of Kolor rattle cans. I first tested it on the forks to see if it looked any good, and I was happy with it so I bought some more and did the frame too.