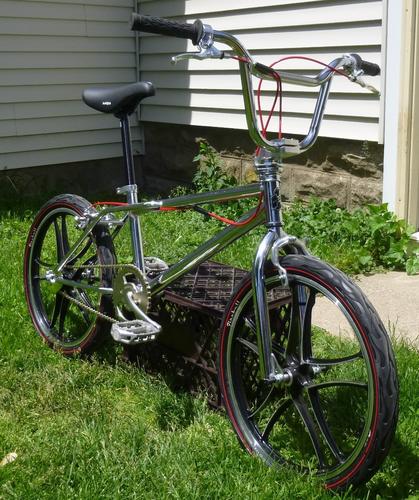 Some people might disagree but I consider myself pretty lucky for scoring this one. Basically how it went is I stumbled across this complete Huffy Flatbed and a Huffy Intense f/f with the headset and rear brake in the swap meet section on here. The deal was the bikes were free,just pay shipping. Calling me silly but I have actually had my eye out for a Flatbed or similar Huffy for quite a while. For those of you that haven't noticed before if you look closely at the Flatbed frame,with the exception of the drop outs and how the tail is welded to them,is almost identical to the '93-'97 Mongoose Villain. And the Intense is very similar to an unkown frame I've had for a few years that I really like but some dummy engraved all over it. Needless to say I was quite excited to find two bikes I've had on my radar for some time,in the same place,at such a potentially low price,I couldn't pass it up. After calling dibs and a quick pm inquiring about the shipping cost I waited for a reply. Once I received the pm that the actual cost had been calculated I promptly made payment($60 for the pair!!) When I found them I could see in the pics they were both in decent condition(for the price) but upon opening the package I was very surprised and happy to see how nice they actually are. I already had the rebuild for the Flatbed planned out before my payment even cleared. I decided right away that I wanted to redo it with as much chrome,polished aluminium,and silver painted parts as possible and the soft bits(tires,seat,grips,brake cables) would eventually be anything but black. It took a few days but everything I planned to reuse cleaned up really nice with just a bit of chrome fade in the nooks. Normally I ditch detanglers whenever doing a teardown. But I remembered I had a really nice chrome setup from some other whatever so I decided to keep the freestyle vibe by replacing the original detangler bits and headset with chrome pieces. The weekend before finding these Huffys I scored a worn but decent Dyno VFR at a flea market with a really nice all "silver" GT wheel set with polished rims and aluminum hubs. Considering the plan for this build is have all metal pieces chrome or polished or silver it was only natural that the GT wheel set would be used. The original bars cleaned up really nice too but I plan to use them on something else so I went with a really decent polished stem and bars from a mongoose villain. As mentioned the plan from day 1 was to use very little to no black. After checking around for a bit I found the baby blue gyro cables for ebay for under $20 with that my mind was made up. baby blue/light blue it is. I scored some AME grips,tech 77 levers, an aluminum seat post and a chrome chain from pork chop. I decided on a dark tan seat I found on amazon really cheap and a super sweet aluminum sharp sprocket. I'd like to replace the 1 piece cranks with a nice 3 piece set someday. I also plan to replace the tires with something less aggressive and probably colored but I haven't decided on what. There are few other details like pedals and I'd like the brake calipers to match,little stuff that is likely to some time but I'm really happy with the results so far. update 10/16--I swapped the tan seat for a baby blue aero I found online for like $10. and I had the fortune of scoring an almost new,as in less than 1 year old with barely a scratch, walgoose with my favorite mags at a garage sale for $60! I wanted different tires and was on the fence about the all alloy/silver gt's so I put the new set of mags/tires on and I'm really, really liking how they look. another update-scored a nice set of dyne fireball flame tread tires of ebay and I wasn't luvin the blue anymore so I swapped the cables,grips and seat to go with the tires. I also switched to a set of black ops gt knock off bars.