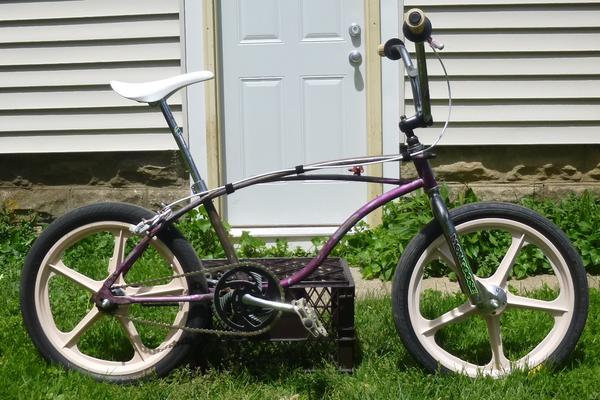 UPDATE: Got this back from my buddy in Feb of '17 after a trade for parts he wanted for a Diamondback he's trying to put together.

Pretty cool story about this one. I found a dirt cheap mountain bike in a town a few miles away on cl. When I got out to the guys house I saw this Huffy Rail slapped together with a set of mountain bike forks and sorta rusty ape hanger bars mixed in with a ton of other vintage cruiser bikes. The frame is one of the coolest I've seen for a muscle bike so I had to ask how much.....$40. Not bad considering the rarity of it but I didn't have the cash at the time. A week or so later I text the guy to ask if he would be interested in trading it for a sh*t ton of car mags(hot rod,car craft, etc) and a few dvd's I cant sell on cl or a yard sale,if you know what I mean. We made a deal for that weekend & when I went out to the guys house I unknowingly spent 5 hrs hanging out and talking about bikes & cars. We have made a few other transactions over the past year or so and became friends in the process. Now about the bike. Not sure exactly what year it is but these were made from '66-'69 (the '69 model actually had a steering wheel!) As you can see from the pics it had def seen better days when I brought it home. After having seen a few Schwinn Fastbacks on here rebuilt as bmx bikes that was exactly what I had planned for it. At 1st the plan was to go for a patina'd look and just sand the really bad brush applied red paint. But when I started to sand down the BB just to get an idea of what I could end up with I discovered the awesome original metallic purple. After about 2 days and a box of sos pads I managed to remove 99% of the red and uncovered the gloriously imperfect purple and bare medal(bare from sanding before the red paint would be my guess) Luv this bike!!! It rides a bit odd because of the length,22",and the head tube angle but def a great cruiser. Its been thru 3 or 4 rebuilds but I think I'm finally satisfied with its current state. After getting this bad boy back I decided it needed another rebuild, with the exception of the mongoose front end. The 1st thing was a sweet set of acorn mags I scored from another member located in England for a cool $110 shipped. I kept the original big n lil muscle bike tire look, just because. With the color of the mags being not quite white I thought a bit og an 80's freestyle color vibe would work for the rest of the bits I wanted to swap out. The DK sprocket and grips were found on ebay The other white and pink bits came from bmxmuseum members; the seat for $20 and a full set of diacompe brakes for $15!