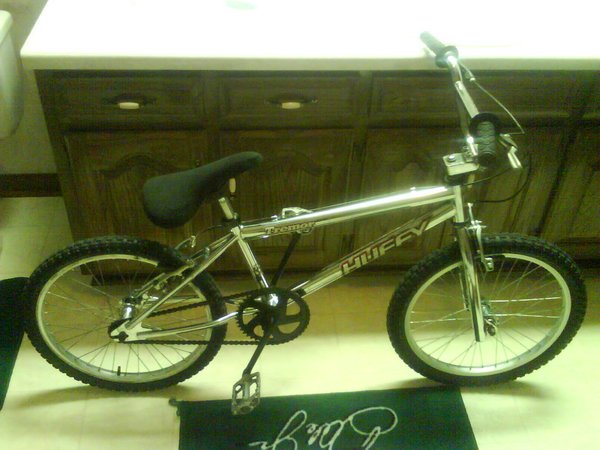 Ok, I know this is just a walmart p.o.s. to most of you but to me its gold, nad here is why. My parents bought me one of these new back in late 97. Well it was my first BMX bike and also the bike i started racing in the NBL with. Over the years to come the frame had so much abuse it wasnt rideable (sp?). Got taken to the scrap yard.

Well after looking for a few years i finally found another one. This one was all original except the seat and seat post when i got it. Bad thing was the frame was spray bombed black. Stickers were taped over so they are still decent. I stripped all the paint off with a razor blade and polished the chrome up the best i could. Also the original forks and cranks were bent so i replaced them with other parts. About 18 hours later this is how the bike looks now. To me it is my favorite bike i have and very sentimental just b/c i have wanted another one for quite some time now. So yeah, it may be a walmart bike but i love it and it rides great.

More Bikes From mongoosefreek (8 bikes in museum. View all)