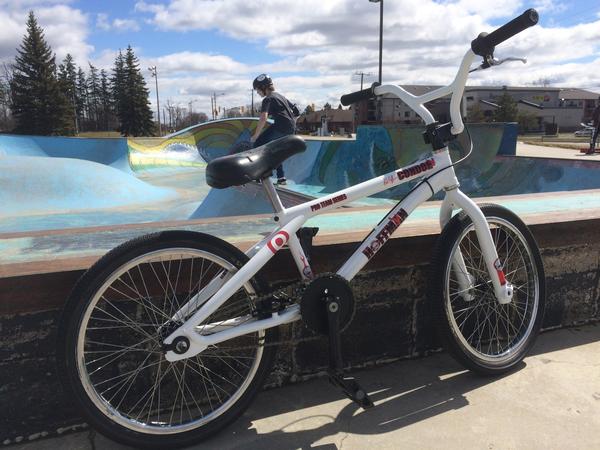 Picked this Condor up from member reignsainth about four years ago. It was originally gunmetal in colour (what I always thought of as HB's version of raw -- in reality a very little bit of grey added to the clear coat.) Unfortunately, the bike had at some point been spray painted gold, and in removing the gold, the previous owner had ruined both the original paint and the decals. It sat a long time, till I figured out what to do with it. Ultimately, I had it powdered white (with a little pearl) and reapplied 2003 Condor Pro Team Series decals I had printed (Thanks Attila!) The Low Drag II bars were done at the same time. Everything else on the bike is as it was found: survivor cranks, stem, seat and seat post. I added the correct grips (thanks Frank) and found an OG set of Skidmarks in the Beta. I have the original pegs... but at 38 lbs without pegs, I didn't really want to add the four extra pounds back to this scoot. It's pretty well catalog-correct, but I found the target stickers, and then decided I'd do it up with a couple of Mat's sponsor decals, like a bike-check I saw online a bunch of years back -- there's the two target decals, and a Duffs decal on the DT. I'm calling this one done... but the truth is, I really want to re-do the rims. The chrome is flaking pretty bad, but the cost of doing it is pretty high. We'll see what the future holds...