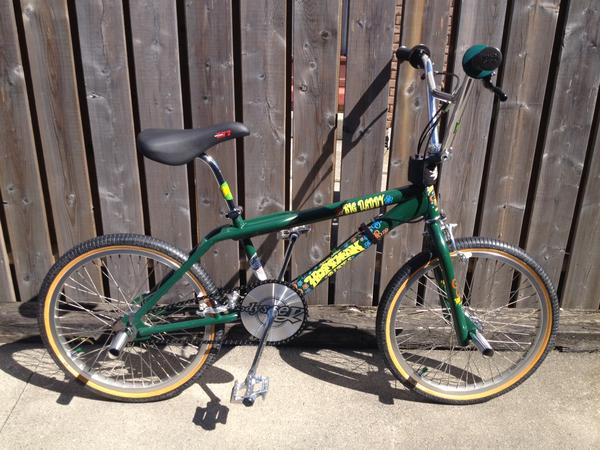 A BRIEF HISTORY OF MY SE Frame & Fork: SE Big Daddy Frame: ".... Factory Quamen rider Bo Wade bought big daddy frame brand new at a contest he was at in '93. Bo had the dropouts machined to 14mm because that was the trend at the time. The frame was ridden for a short period of time then Bo put it in his closet were it stayed for 15 years. I bought the frame directly from Bo which makes you the 3rd owner of the frame"-  Suicidepan

SE Big Daddy Forks: " I got the fork from Jay Brand, a member on museum and he also has the homeless bikes blog. I think he bought the frame and fork new, but traded the frame shortly after. I don't think Hoffman made many 93 frame sets, and forks may have broken or bent more often than the frames ...." - Almasterb

I dedicate this build to BMX legends: Matt Hoffman ,Kevin Jones ,The BMX MUSEUM, and anyone that ever rode one of these fine flatland machines.

We lost a BMX legend today in Dave Mirra . Seen in many of my early magazines riding this exact model for Team Hoffman pushing the limits of vert/ramp riding. A huge huge loss for BMX

More Bikes From Shiznitme (5 bikes in museum. View all)