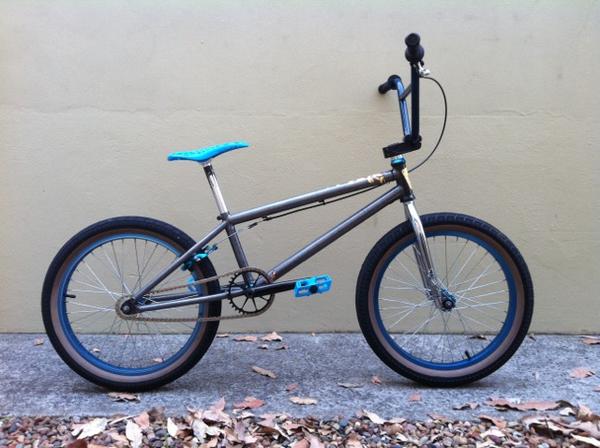 It's either a rare frame or no-body wanted one because of bad-boy Ben Hennon's rep on the BMX scene. Here's an extract from an article about him in a UK magazine:

"Ben is an outspoken and intimidating personality – the centre of attention in a sea of attention seekers. In recent years he has become a dominant but charismatic and popular figure. He is our alpha male, our silver back, our champion. Yet Ben has experienced popularity and rejection in equal measure. For a time his interaction with the majority of the UK scene could be summed up in a single word – hate. Dressed all in black and flipping off the crowd, he was the pantomime villain of the English scene, credible sponsors ignored him, he was an outsider, an outcast."
Being from the UK and being slightly Hoffman-obsessed, as soon as I heard about Hennon and that he was a Hoffman-rider I knew this was the frame I had to get. Problem was, it was impossible to get hold of here in Australia - so I found a clear coated one on AceBMX in the U.S. and paid the $ to have it shipped. I opted for Hoffman Bama (Seth Kimbrough signature) forks and then set about building the rest of it with a preference towards Demolition components.
It's really nice and light, which is helping me get some of the moves back from yesteryear but have yet to give it a proper skate-park test. This is how it turned out:
Hoffman Bama Bars
Hoffman late-90s Stem
Demolition V2 Integrated Headset
Hoffman Grips
Profile Cranks
Tree HT Spline-Drive Sprocket
Demolition Mid-BB
Demolition Trooper PC Pedals
Demolition Rear Brake
Dia-Compe Tech-77 Lever
Weinemann Rims
Cult Diehart Tyres
Tioga Spyder Pivotal Seat
Demolition Seat-post
Thanks for looking.

More Bikes From Steviej40 (7 bikes in museum. View all)