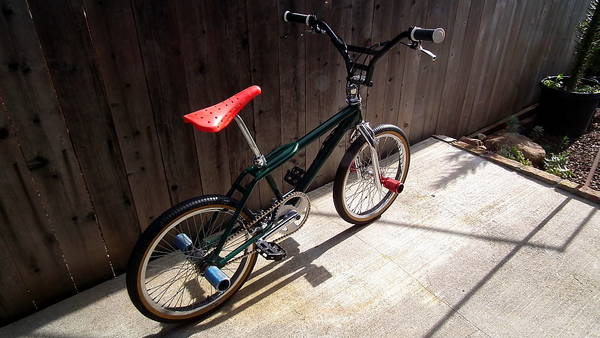 Well Here it is the rarest most meaningful of my Hoffman bikes my 1993 SE made Hoffman Big Daddy. When I think of flatland the first name that always pop up in my mind is Kevin Jones. I never get bored watching all the amazing videos in the Dorkin in York series. I set out to build an acurate replica of the green 1993 se made big daddy kevin jones rode in dorkin 10 and wheelies. After a long long search for parts I`ve completed my Hoffman grail bike, I`d like to give a special thanks to Bo Wade, alan (almasterb) Binker & BMX*Racer*1983 for helping source some of the most important parts for this build.

This bike is 100% rider and there are NO restored parts on this bike, the green paint on the frame is 100% original 15 years in storage helped save it, lol. Only one batch of 200 of these SE made Big Daddy frames were produced and I have no idea how many survived. Anyhow a very cool piece of Hoffman bikes history and a tribute to Kevin Jones and the Plywood Hoods. I hope everyone enjoys it as much as I do , thanks for looking.....