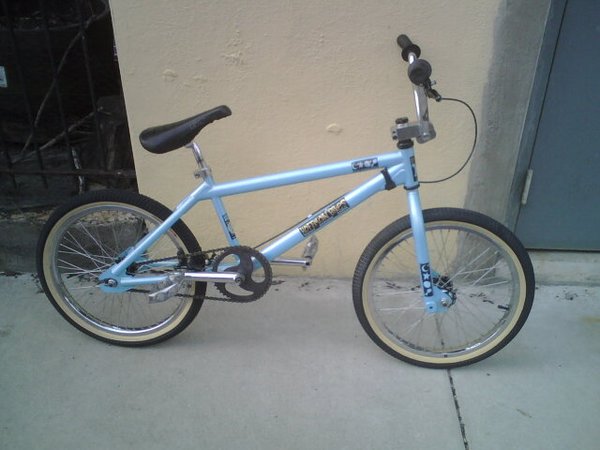 My obsession with the Hoffman Taj came from visiting my LBS (Bay Area Schwinn) in Corpus Christi Tx in about 1996. They were one of the few shops carrying Hoffman Products and I had always been a HUGE fan. As I made my way to the small BMX section I saw a Pearlescent baby blue Hoffman Taj hanging from the ceiling. I was captivated by its design, color, and purposeâ€¦ a street and dirt jumping machine designed by the most influential BMX rider of the midschool era (IMHO). Of course at the time the bike was out of my price range and was also spoken for by my good friend Chris Pulley. Every time we would go ride I would stare at his bicycle in half amazement and half jealousy. After about a year he spray painted the bike in a camo pattern and that was basically the end of the baby blue taj. Fast forward 10 years to early 2006 and I start to search for a baby blue Taj. My search leads me back to Corpus Christi, Tx where my friend Randy Trade me his Chrome Taj for my Chrome Hoffman EP. I agreed and was somewhat satisfied with finally having a Taj. I built it, rode it a bit, and put it on the other oldschool BMX forum. But I was still not satisfied. In about late 06 I come across the exact frame I now have in a Craigslist ad in Cincinnati, OH. After some emails with the vendor I decided I did not have the cash to buy his bike. He was not willing to part it out and I didnâ€™t need anything but the frame and fork. I kept kicking myself for letting that go but there was not much I could do. Finally after many Google searches in early 2008 the BMX collector that goes by the name of 80'skid bought the bike from the guy in Cincinnati, and started to sell off parts from California. I emailed him as soon as I heard the news and made him an offer on the frame and fork. Soon enough it was delivered to me in Philly. This bike has been a dream build for me for over 12 years. I tried to build it up with as many era correct parts as possible to what I would have loved to ride at the time. This bike was meant to be ridden but I just can not bring myself to doing that. It will forever sit on my wall as the most valuable piece of art I will ever/ could ever want to own. Frame: 96-97 Hoffman Taj 1" headtube Fork: 96-97 Hoffman Taj 1" threadless Bars: Hoffman Low Drag Grips: ODI Longneck Stem: Hoffman Super Stem 1" threadless Cranks: Haro Fusion 3 pc Pedals: Haro Fusion DX platform Rims: araya super 7X 48h Hubs: Gt Mohawk 48h sealed 3/8" Spokes: Straight gauge stainless Tires: Primo V monster Skin Wall 20x 1.95 Freewheel: ACS Claws Sprocket: Profile Ripsaw 43t Seat post clamp: Hoffman 7/8" Seat Post: Hoffman Straight 7/8" Seat: Gt Freestyle Plastic Brake lever: Tech 77 w/ locking button Brake Cable: Odyssey Slick Brake: Dia Comp AD 990 Pads: Salmon Kool Stop

More Bikes From bmxdan (2 bikes in museum. View all)