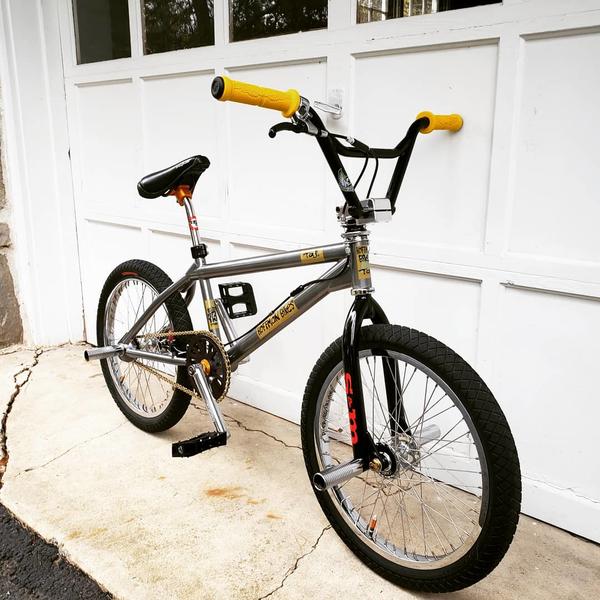 Traded a friend for this frame back in 98 or 99 for a 1995 Hoffman condor. Looking back on it the ramp room condor would be the more desirable frame nowadays and at the time I wanted a longer frame because I grew to 6' 1" tall. The top tube length worked out great and really loved riding the Taj dirt jumping, street, and on ramp.

Sometime in my early 20s the bike began to set around in my parents basement and later ended up living in a shed once I bought a house some years later. Eventually in 2016 I moved and gave the bike along with other junk I accumulated to my dad to get rid of. I didn't know where it ended up but turned out my dad had dropped it off in a local scrap yard ????.
Some time had passed and I met a guy riding a new retro haro master and thought how great it would be to have a bmx again. I started looking at all the mid school parts on here plus ebay and got the urge to build a mid school tank like I used to ride. During a phone conversation I mentioned this to my father and it must have planted a bug in his ear. About a year after the Taj made it to the scrap yard my father was there and saw the bike setting in the weeds. On of the workers there must have thought it was worthy of setting aside and pulled it off the junk pile into the weeds along the outer fence. He scooped it up and brought it home for me.
It was a miracle I got it back and still complete with all the parts. Surprisingly it didn't look too bad for sitting outside in the weather for that long. Next I stripped it down and had the frame powder coated. Some of the other parts like peregrine wheels (which I bought new from Dan's Comp back in 97), haro fusion cranks, primo seat, primo tires, and bent tech 77 lever was originally on it back in the 90s. I reconditioned or shined those parts as best I could to keep them on the bike. The stem I designed and made custom to fit the  1"S&M Stupidforks that I scored here on bmxmuseum. All the other parts and stickers I scavenged online and built the bike in mid school style to my liking ????.
This bike turned out awesome in my opinion and rides like its brand new again. Takes me back to my late teens and how much fun I had flying thru the air on this frame loving life! Already planning my next build and finding more mid school treasures. Thanks for looking and reading if you took the time ?.