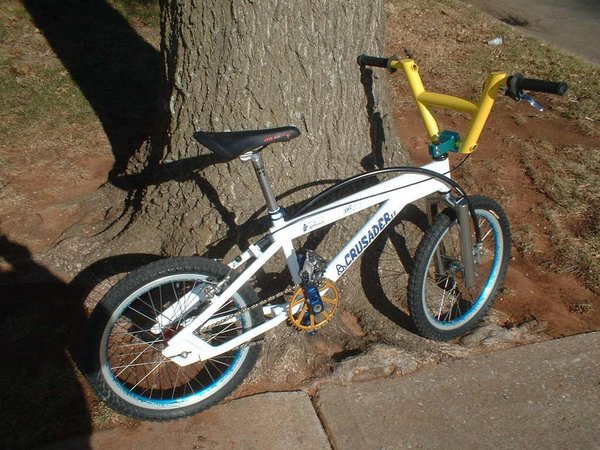 This bike is just plain SICK! WAY ahead of its time in terms of technology (1 1/8" headtube/threadless set up)...This bike was designed and built by Chad Herrington and marketed by Turner Drive Systems who many of you may know developed a AWD (all wheel drive) set up for mountain bikes and bmx bikes...According to Chad himself, there were only 50 Crusader II frame/fork combos, 75 Crusader I frame/fork combos made, and only 50 sets of the handlebars (which were made by Kastan in their later years)...According to Chad, he had quite a few bikes sold, but Turner Drive Systems didn't fill the demand and pretty much ran the brand into the ground by not filling the orders... Back to my bike :) Chad told me that my bike appears to be one that he built...He said it looks like one of his original builds that he sold at the ABA Grands a few weeks after the first delivery...Chad also told me that he worked at PMC which explains all the PMC parts...I have not changed a thing on this bike and it looks pretty much brand new... Parts breakdown: Frame: Herrington Crusader II Fork: Herrington Crusader II Bars: Herrington Stem: Odyssey BANG Grips: ATI Lever: Odyssey Sidewinder Brakes: Onza Cantis Headset: Aheadset Seatpost: Kalloy UNO Seat: Odyssey Rims: Odyssey t-1000 w/blue flames Hubs: Front: Sachs 5/Rear: PMC high flange Cranks: PMC Sprocket: PMC Seatpost clamp: PMC Pedals: Odyssey Black Widow lites Tires: Mongoose Blur