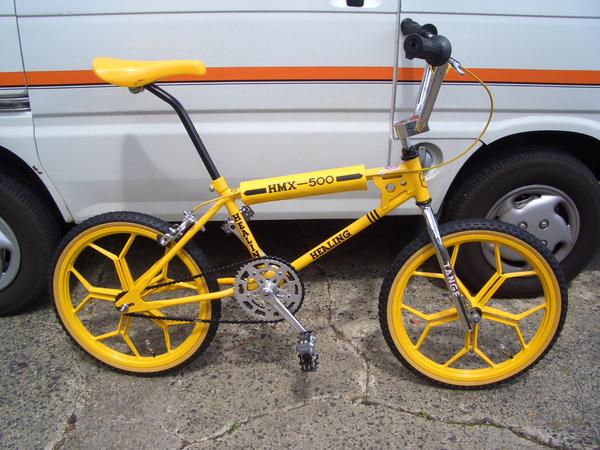 20" HMX500 - The 1st BMX I ever got for my 5th birthday, this one sparked the craze for restoring the old school rides again, great memories

They are old pantha mags, series 1 (I think) few cracks and re-welds but the powdercoat paint is new and looks good

New Kenda Comp 3 style tyres and tubes on them

Some history I found on Healing HMX:

all the same frame of the type 3 model....all tubes were the same size....HMX 600, was sold with Skyway Tuffs and most were back pedal brake.

The pit bike 16" was called a Mini-Max..Same frame story with Supermax ..all Supermax 2's were pretty much spec as a Redline MX3..Most redlines sold in NZ were made

HMX the first model with No gusset were all recalled and replaced and frames were all dumped by Healings....as they broke within a week....Just like the First pantha

The HMX series was a low priced bike for average kids circa 80 - 85, they were produced locally by Healing (Hence "H"MX).

The HMX 500 was notorious for cracking up around the head tube, the single gusset wasn't enough for the regular steel frame,

and it's pretty rare to see a 500 anymore simply because of that - most went to the dump, and was replaced by the superior HMX600!

haha, not much changed between the two except the 600 got slightly larger diameter main tubes (not 100% on that) and Skyway Tuffs.

Though they can still be seen at garage sales now and then.

They served nearly every kid in New Zealand pretty well, the thing is we're a small nation, so the market for bikes was a lot smaller,

hence when they get thrown away - they're gone. It's not really in our culture to horde stuff.

In saying that, BMX in New Zealand in the decade from the mid 70's, to the mid 80's was HUGE, and there certainly was never had a shortage of the "exotic bikes"

I grew up in a middle class type suburb, and my mates had Kuwahara's, Skyways, Rippers, Hutches, Redlines etc etc etc, they were a pretty common sight really,

BMX sent Skateboarding into the "dark years" here, and followed 6 - 7 years later or so.

You still see the NOS label sets for HMX series bikes popping up on the local auction sites now and then, as well as period correct brakes, cranks, and the other bits n pieces.

More Bikes From sperlingaz (44 bikes in museum. View all)