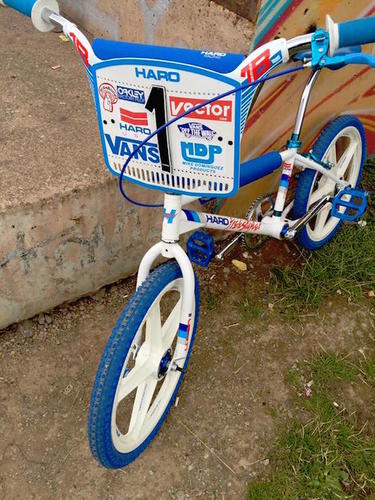 Tribute to the 1984 Debut of the Prototype Haro Sport with the single top tube, ridden only once by Mike Dominguez at Del Mar for round 3 of King Of The Skateparks March 84. 1 of 3 frames produced.

One of only 3 prototypes produced, this one comissioned by Haro to C4Labs

I have this one, which was the first produced and a frame only (Serial Number: MIKED 00 C4) The forks had yet to be completed on what was to eventually be, the actual production 2014 “Dominguez” Tribute .

John Buultjens of HARO BIKES had the 3 frames built by C4 Labs, using the prototype Dominguez Tribute frames to recreate the original history of the prototype single top tube.

In 1984 a single top tube prototype Sport was provided for Mike Dominguez and a chrome version for Richie Sigur, and debuted at Del Mar Skatepark in March 1984 for Round 3 of the AFA King Of The Skatepark's. Richie Sigur's debut was short lived as he quickly broke one of the chainstays.

The third one was used in the original Haro Sport advert.

The bikes only got one outing .

Eddie Fiola turned up with his prototype GT Performer with the seat mast platform, which sent Bob Haro back to the Torker Factory drawing board

The original Single Top Tube Haro Sport is thought to be THE HARO “Holy Grail”, but alas it is believed the framesets were skipped. It is hoped, however, the factory spec complete used for the advert may still be in hiding somewhere.

This frame was built by myself, as an exact replica of the version Mike Dominguez rode at Del Mar, California for that one of competition ride for round 3 of the AFA King Of The Skatepark's.

It features original 84 forks, but all other parts are re-issue since the frame was made in 2013, and based on a 2014 tribute retro.

Every part is identical to Mike's version of this bike, right down to his personal blue Skyway hubs, blue bottom bracket, his custom decals and the blue lever cover.

The bike got one outing before he debuted the “actual” production 84 Haro Sport, in Livingstone Skatepark, Scotland, creating those iconic images of Eddie Fiola and Dominguez that graced all the BMX mags across the world.

Built and Owned by

More Bikes From stockcar3 (6 bikes in museum. View all)