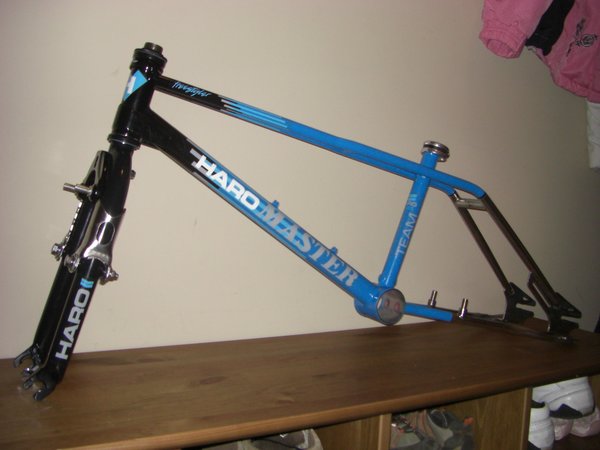 I thought I would post what I have done so far. I've done more since this particular photo but here is a picture of the frame and fork restoration. I changed the color scheme to blue/black/chrome instead. I guess after looking at the 1988 Haro Product Catalog it's painted like the 88's were. Since I have 3 more decal sets I'm considering getting the fork re-chromed to make it like the actual 87's. I'm pretty happy with the finished product. It turned out really well. Instead of fading the powder coat I used heat tape instead which was a 2 part process. The head tube was first then masked again for the body color. I had to do this because of the decal set. It's printed on clear vinyl. Which if you think about it is way easier to work with because I never had to match powder and vinyl colors. I just went with the color I wanted. Since the photo I got rid of the brake plate and decided to go with an original Nippon instead and bought some original NOS forkstanders for the fork as well. The frame has been well used. The seat post tube has been rewelded and both fork dropouts have been rewelded. Even the bars were rewelded but they were way to noticeable so I bought new ones instead which will be rechromed and powdered with fresh decals. Luckily the welder did a very nice job on the seat post tube and fork dropouts so they are barely noticeable after the powder was applied. I must say that is the most rewarding bike I've built yet. It has been a lot of fun and it's totally cool that there is a site like this one to be able share it. Great idea Gary, this site rocks!