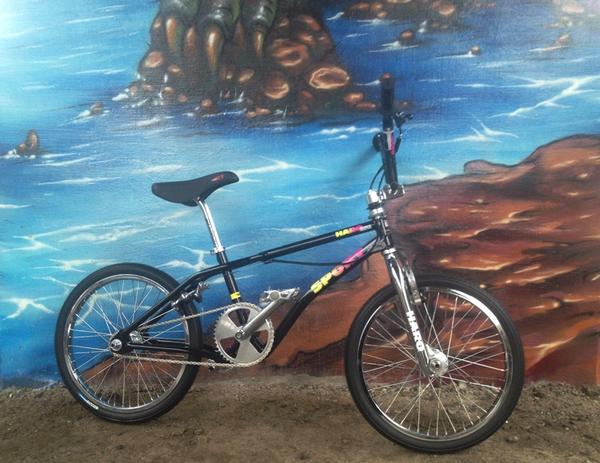 In the mid-90’s, the Haro Sport was the bike that time forgot. Redesigned as Street riding progressed (and was arguably the best bashguard bike of all time) in 1989, but not officially introduced until midway through 1990, the Sport kept the same great ramp geometry from the 80’s, and incorporated the bashguard that was so important at the time as the sport of BMX Freestyle progressed, and borrowed more from skateboarding. And then… it was kind of forgotten. Sure, Haro gave the Sport a 1” seat tube in ’94, and thicker dropouts along the way, but while other bikes were being redesigned, the Sport languished with generic rims, mid-grade components, side-pull caliper brakes (the 990 was lost after 1988, a cost-saving measure, and the BOA was lost after 1992, again a casualty of the bean-counters) and a 1” quill stem. At one point, it was thoughtlessly given Haro’s new grind-disc sprocket, in addition to the integrated bashguard, and suffered a name-change to ‘Basher.’ However, there was always a quiet dignity to the Haro Sport. While Haro’s other bikes grew fat ‘Megatube’ designs, the Sport kept Bob Haro’s original design and the wraparound head-tube gusset. Even in the mid ‘90s, Haro riders of the day could occasionally be seen riding the Sport over newer designs, testifying to its tried and true design and geometry. The Sport could be found hiding at the back of a Haro catalog up to 1996-97, available as a frameset only (most likely old stock from ’94-’95 Haro was trying to sell off) long after the writing was on the wall, in the form of the new Blammo.

But what if the Sport had been given the same design upgrades and care that the newer models received? What if the Sport had stayed as the flagship model it deserved to be? What would a 'top of the line' factory-correct Haro Sport from the mid-school era look like? This bike is the answer.