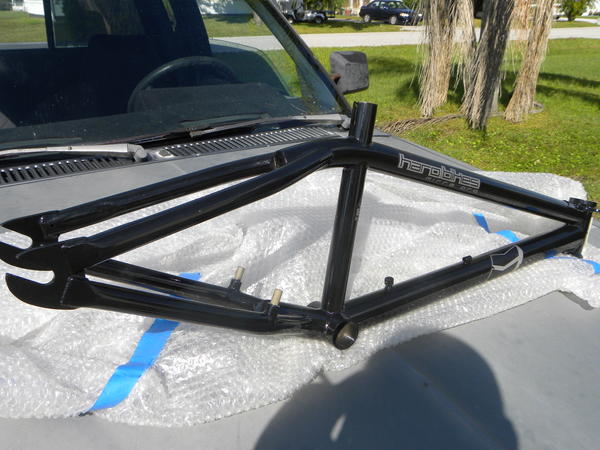 I am a fan of the American made Mirra pro's and Backtrail/Nyquist Pro's, but they are very hard to find. I was screwing around on craigslist one day and found what appeared to be a 2004 Mirra Pro frame in NOS condition out in California, unfortunately I live on the other side of the country. To make it even better/worse, it appeared to be a American Made frame, which they did not make. I and everyone else were under the impression they quit doing the U.S. made frames in 2003.  After a week of talking with the seller, during which I found out he was the original owner and he purchased it from Dan's Comp in late 2004 as a project and shortly after quit riding and it had set in his bedroom ever since, he agreed to take a paypal payment and to box up the frame if I had Fedex pick it up and deliver it to me. Its very nerve racking to send a wad of cash to some guy off craigslist on the other side of the country. and of course the suspense of waiting for it to be delivered almost killed me .. LOL. When it arrived I was extremely relieved to find it still appeared to be exactly what I thought it was, and after talking to some of the other more knowledgeable Mirra guys we have all concluded it is a 2004 American made frame. So far the only one I know of to surface in any enthusiast/collectors hands. This is the year the Mirra Pros went to a more new school flavor, with Euro BB, Small drops, integrated headset, and smaller diameter lighter tubing among the changes. This one is Haros SG Black color, the first year this particular black was used as far as I'm aware. I am currently in the process of collecting parts to build this frame and will be riding it. No carpet Queen here. My goal is to build it with all Haro and Premium ( owned by Haro and their parts were used on Mirra completes from 2004 on, the year Premium started ) NOS or A+ condition parts from the 2004 Era. Preferably as much "made in U.S.A." stamped stuff as possible. You can check out my build thread, the link's in my signature, and so is the link to my Mid-school Haro thread. I think that about covers it, except to say that of course this is my favorite frame/bike/project to date, and im extremely happy to have found it and gotten it out into the light of day. **and yes, if you thought you noticed something, the headtube badge is ever so slightly off center to the right a little, im not sure whether to try to "fix" it, or leave it as is. My thoughts for now is to leave as is considering its a factory mistake and adds character and a little bit of extra "one of a kind" to this already extremely rare frame. Also, forgot to mention, when the frame arrived I found the seller had included the original Dan's Comp bill of sale which he had kept in the box with the frame all these years, as well as the packets of Dan's Comp stickers and the head set they sent it for him as well. I will be adding a pic of the Bill of Sale in the comments section as well as more pics of the frame/bike before, during and eventually after the build process.

UPDATE - have since sold but im leaving this up since its the only one on here. I have also seen at least 2 more since i sold this one. Both in black as well.

More Bikes From HaroSickness (5 bikes in museum. View all)