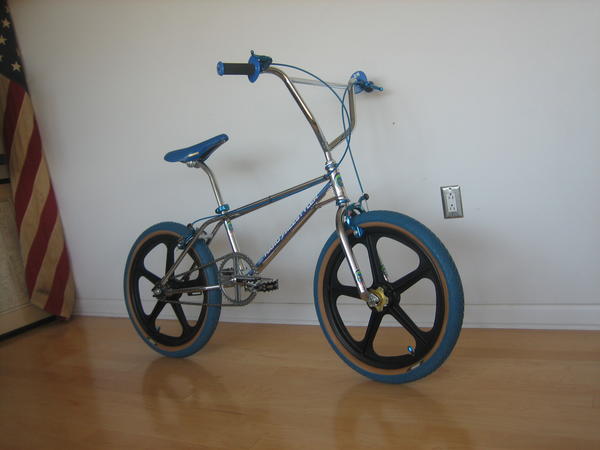 I sold my Freestyler back in '85 so I could put gas in my car. I bet this is a very common story. In 2008, the bank bust put me as well as many others out of work. I was fortunate to have some leftover funds from the sale of my home a year earlier, so with nothing to do and Ebay a click away, I started to collect parts. I built her similar to how I had run BITD. I ran Graphite Z's and not Tuffs, but I had wished I could. 1st gen 1980 only pinchless Flight cranks I did run, and they were terrible. They were sloppy and wouldn't stay tight. I bought them from the local older punk kid with the mohawk whose Dad would take him to go race. We bought a lot of used and broken last years parts from him. Still had to have them on this build. I broke a couple pairs of those XC's as well. In reality, I swapped them out for Takagi 1 piece and DX pedals and never fretted again. I was a big fan of Bob Haro BITD and bought whatever parts of his I could afford. I waited for those Vector bars for months BITD. Who knew they would take so long to get to the East Coast. I wasn't a fan of his brake lever however, to flexy. I ran the DX levers. Awesome. I parted this bike out shortly after I built her. I kept the F&F until a couple of years ago. I wish I had never sold it.

More Bikes From OMlanded (4 bikes in museum. View all)