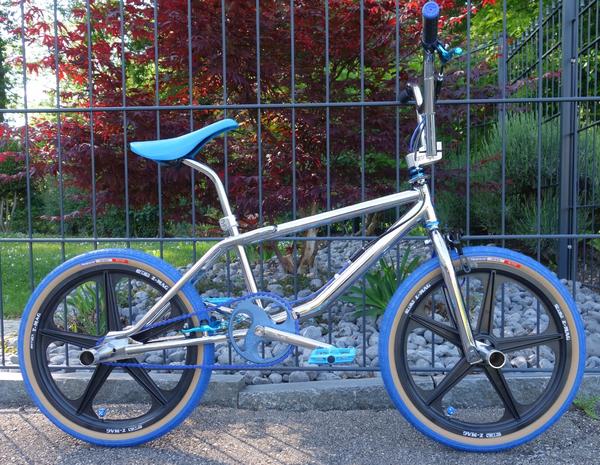 1996 GT Pro Freestyle Tour, customized for my son in a blue/chrome color theme.

The 1995/1996 range of GT Pro Freestyle Tour bikes was my “Holy Grail” from BITD. It took me almost 4 years to gain the knowhow and to source all the parts from around the world to complete this build. I sincerely thank all my fellow BMX enthusiasts on this site for your technical advice and willingness to sell/ship parts abroad. I couldn't have done it without you, and thank you bmxmuseum.com!

Fueler is offered as a complete bike, Power series tubular cro-mo cranks introduced. GT and Dyno line grows to 27 models and over 20 framesets. Powerlite and Robinson lines are also introduced with a combined total of 16 models.

GT left the old building on Gothard and moved into a sprawling warehouse back in the original town of GT, Santa Ana, California. With twice the space for both warehousing and office GT kept growing and growing.

In October of 1995 GT Bicycles Inc. went public on the NASDAQ stock exchange with the help of Bain Capital, a well known investment bank in Boston, Mass. Richard and Gary were turned in multi millionaires over night.

BMX and freestyle account for approximately 40 percent of the sales.

Dave Voelker and Gary Ellis on the cover of the 1996 GT/Dyno catalog.

Aluminum hits the track with the all new "Speed Series Team" . This is a huge step for the former Cro-mo driven BMX product line. GT applies lessons learned with Zaskar production into BMX technology. GT and Dyno both feature price point Taiwan frames to capitalize on the trend. There are now 50 models between GT/Dyno/ Powerlite and Robinson.

July 1996, on his way to a NORBA National race in Big Bear, California Richard Long was killed on his motorcycle. Even Richard's death could not at first slow the massive inertia that GT generated. Business kept growing and GT soon purchased distributors in the UK (This deal was actually consummated in the months prior to Richard's passing) , France and Japan in the months after Richard's death.

More Bikes From asterios98 (2 bikes in museum. View all)