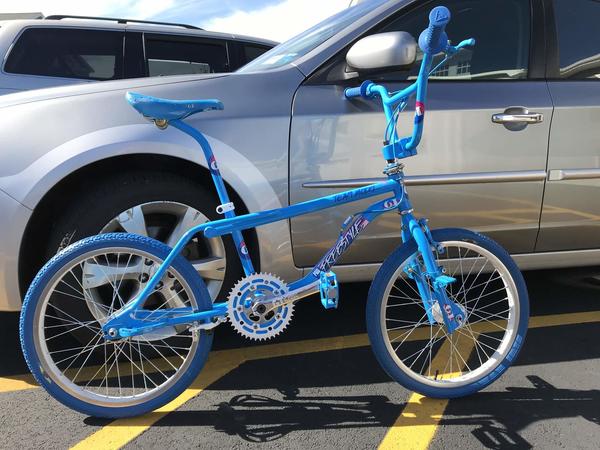 As many of you know from my other post "To Powder or not to Powder..." this bike originally started out as a Lavender Survivor but was rusted and peeling all over and basically looked beyond restoration. But I had faith in this build and sent it straight over to chip @ C4Labs who turned this beast into a beauty.

Now a little back story...So a member by the name of Tony Taylor was on vacation and posted a pic on Facebook of this bike sitting in a bike rental shop and so he called the number and worked out a deal with the owner for the bike. So then finally after 30 years sitting rusting away this little dream had a new home. Then one day Tony posted that he may be listing some bikes for sale and so I PM'd him and he mentioned to me that another member (which happened to be Opedogg47) already had dibs on it but if he decided he didn't want it then I would have next dibs. So I sat back and waited and found out that Opedogg47 did end up buying it. I was a little disappointed but thought well maybe I'll reach out to him and see if he would like to sell it. Well long story short we did come to a deal and now it was finally in my possession.

Well here is what it has become and I only need to add a few final parts to finish the build and will post the rest of the pics when I get it all together.

More Bikes From AIRGHOST (4 bikes in museum. View all)