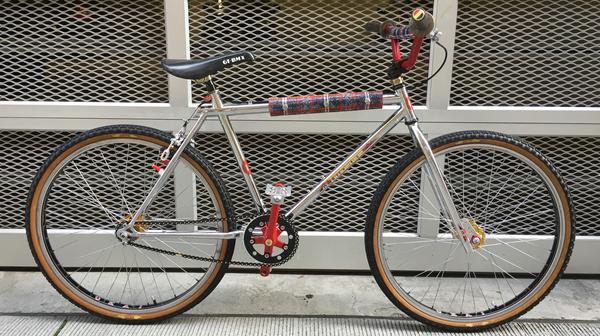 As we all know, 85-86 Timberlines don't come up for sale very often. Over the summer, I watched an OG complete drop in price to $400 on Ebay. I was between pay periods and asked the GF to borrow the money, and she totally flipped her $hit! It sold 5 days later, 2 days before I got paid. Oddly enough, BMXM member KingTusk posted a f/f with white Timberline lettering (during my break-up) which I bought asap! A few days later, I had the opp to purchase a pair of black 26" Ukai Speedlines on CL that I couldn't pass up. Next was the OG-condition black 84 GT-Tuf-Neck stem that I don't need to harp on the holy grailness of. I think it was on Ebay for 15 minutes before I bought it! I already had a matching pair of gold 82 ACS hubs, which I rebuilt the Speedlines with, adding repro Ukai decals to. With these select components, it was a lightbulb-turning-on moment that I would change the color scheme of the Timberline decals, as this build was to be the greatest distraction from a bad break-up and what I could pour my BMX love into!

I have to admit, I felt a bit guilty for taking off the OG decals, as they're such interesting, unusual GT colors. But for that very reason, I felt that I would have 13 shades of green on the bike in the end, so I went with my gut. Amazingly enough, I was able to pull every decal off (minus the bike shop decal which should always stay on!) in one piece and sent them to BMXM member gt350 for printing, which allowed for the repro decals to be a perfectly detailed match! I bought an "unknown cruiser" handlebar that had badly chipped red paint and sliced O'neil grips. I had a feeling they were MX enduro bars, but the dimensions seemed off, as they were uncut. After sanding it down to the steel revealing the numbers and doing some research, it turns out that they are 72 Yamaha JT-2 Mini Enduros! They are the perfect size/application for a BMX cruiser! I also sanded my Sugino GT crank and used red Dupli-Color Metalcast on it, and the bars, resulting in what I call an "anodized blood" shade. After several coats each of primer/paint/clearcoat they turned out pretty good, but not perfect. To make the entire build complete, I bought OG 26" GT tires (which originally came on Timberlines) from BMXM member topyard805, and 26" Akisu forks from BMXM member/admin its-all-good. The pads are DIY and were a pain to make! The weighted KKT AE-7 pedals are so rad, and I'm at a loss for info on them! Couldn't find any other photos anywhere. So if you know anything about them, please shoot me a PM.
After 1.5 months and a crap load of money invested, I feel fantastic about finally having built a GT cruiser that is truely a mix of BMX/MTB/MX, and derived from my desire. And the cherry on top? I built it up on its 30th year!! A BIG THANKS to all those mentioned for working with me on the decals and parts I needed! And thanks for looking/reading, your comments are welcomed and appreciated.
*Update: So after building another Timberline, turns out this one is a 24". I've already switched up the rims and will likely put some Tuffs on this and proper 24" forks. Photos to come!