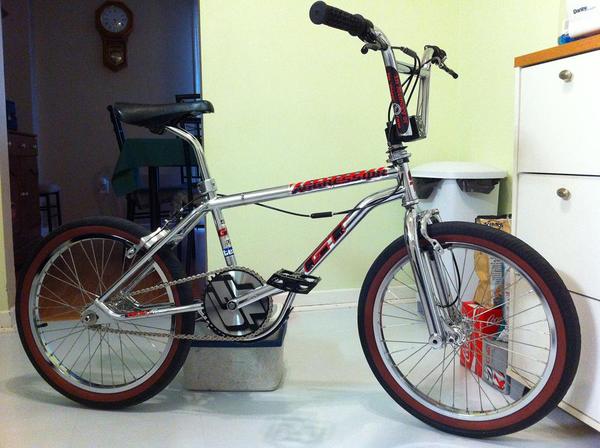 This was my Holy Grail!!!

This GT was the one i wanted, had to have. I purchased it new in my mid/late teens, and it replaced my cracked '90 GT Vertigo (see the Vertigo for it's story).

In short it has gone threw many changes as i was discovering the parts i liked best to make it perfect (in the pic of it mostly original, i added Haro Knee Savers as i prefered them over the original 4 piece GT Freestyle bars), same goes for the decals. I'm still torn on the original decals to this day. I like what i did, but yet i am liking what i see on some of the builds on this site with the original decals. I may just get me a set, and let them sit just for that day i may want it all original LOL!

Threw out time it has sat in a storage room locally with a bunch of stuff, then came with me in my first apartment when the wife, and i first moved together, then the next apartment where it sat in a closet, then followed us to our current home that we purchased, and sat in the furnace room until Dec 2013. As i was going threw the furnace room, i came accross the Aggressor again, and that is where i was deciding what to do with this frame i had. I was considering selling the frame.... until i did some research, then went down memory lane, then decided i wanted to ride again, which brought me here.

When i made the choice to build it, i wanted to build it closely to the way it was before i stripped it apart, i wanted a rider build, not a full on original build. That wasn't the way i rode it, and i want to ride it again.

When new it was equipped with....

Before i parted it (another story), it was equipped with....

Now after rebuilding it....

More Bikes From 90Aggressor (5 bikes in museum. View all)