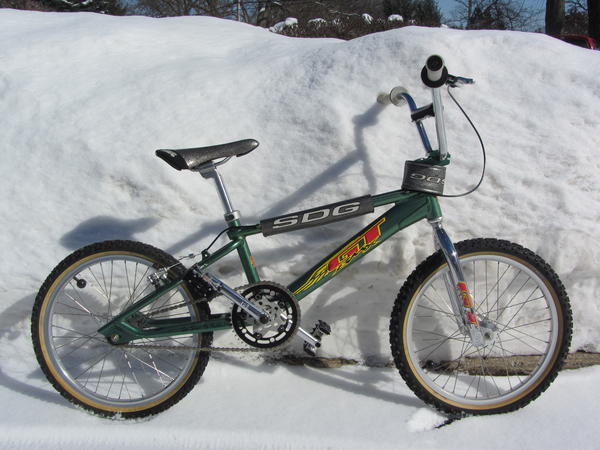 Jeff Soucek (former designer for GT bicycles) started a thread on vintagebmx.com in the midschool section (“90’s GT Designer Saying Hey, Old Memories I Just Found”) talking about his experiences working for GT.  He had several drawings of frames, background information on the designs, etc.  He posted some pictures of frames that he had in his possession still and did a write up on each one.  Here is what he wrote about the speed series frame.

“I dug the old frames out of storage and took some pics today. These things still have the dirt on them from when they were test ridden. Some surface rust has started, but not bad as they have been inside.

For the GT Speed Series - Like I said, this was the first original prototype of this frame I built. The first aluminum GT ever. The only changes that happened for production was a bigger diameter top tube and a butterfly gusset vs the old Zaskar one I used from the parts bin. This frame was unique in the fact that it was the first frame to use ovalized tubing instead of simple round tubes like the Powerlite. You can see the flattened down tube to allow for a proper miter at the head tube yet it could still be full size and round where it met the BB for maximum stiffness. Same deal with the top tube and chainstays. Also another first for this frame was the use of taper swaged seat and chainstays. This meant that the diameter of the tube changed along its length. Bigger at the BB and seat tube, then tapering down smaller at the Dropouts. Swaging is a mechanical process that basically cold works the tube down in diameter while increasing its thickness and further refining the grain structure. This frame was not just a simple cut up round tube and weld it together, it was a whole new lever. It actually took some doing to get it into production as GT had no means at that time for these new processes. So new dies, presses and tooling was needed just to make the tube set.

After building the frame it was decided not to give it to a factory team rider in order to keep it secret. So we gave it to a dirt jumper I think in San Diego named Chad (something with an H) I don't remember exactly who. Anyways, he took it apart and anodized it all green and added some of his own decals and design. Again, don't know what any of it means, but it is still on there just like the day I got it back.”

After reading that it was test ridden by a dirt jumper “Chad (something with a H)” I automatically thought of Chad Herrington.  Luckily, I have emailed and talked with Chad in the past, so I fired him an email with the pictures that Jeff posted up.  Here is the information that I got from Chad in a few emails that we sent back and forth.

Me:   “There is a guy on vintagebmx.com that was a former designer of frames for GT.  Did you ever do any frame testing for GT?  He was telling a story about the speed series frames and said that a guy named Chad H something (he couldn't remember) did the test riding on it, anodized it green and added some of his own decals on it.  I was wondering if you were the rider he was talking about.”

Chad:  “I did test and help design for gt for quite some time. It does look like that is the same frame that I had custom green anodized!!! Can't believe that thing is still around!!!”

Me:  “As for the green GT speed series frame, I talked to the designer of the frame (Jeff Soucek) and worked out a deal with him so I could get the frame and the other parts that were pictured on it.  I told him that I wanted to build it back up the way you had it when you were doing the test riding on it.  I was wondering if you remember any of the parts that you had on it, so I could get it back to the way that it was!  I'm pumped up about the project and I hope I have some of the parts already so I can get started when I receive the frame.”

Chad:  “Don't remember any of the parts that were on the green gt. Heck, totally forgot about it until you sent me the pic!!!

Let me know if I can help in any way. Thanks again for the memories and best wishes, Chad”